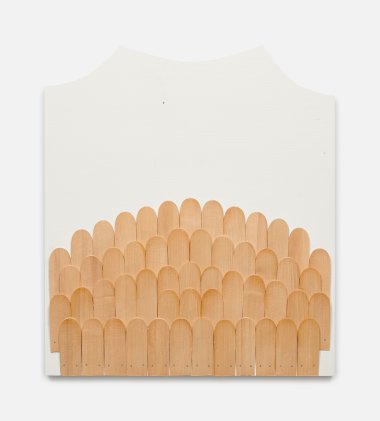 Sketch I of The Lovers, the Studio, a Facade and their Perpetrators – Hof-Atelier Elvira, 2021
Wood, nails
66 × 75 cm
Series of 2 unique copies 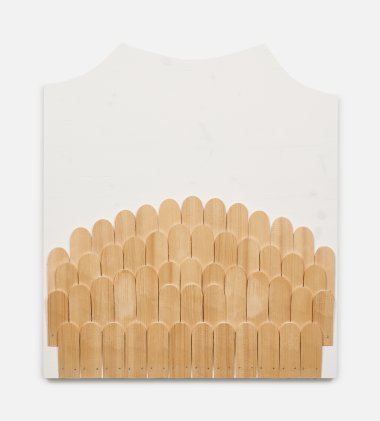 Sketch II of The Lovers, the Studio, a Facade and their Perpetrators – Hof-Atelier Elvira, 2021
Wood, nails
66 × 75 cm
Series of 2 unique copies

Maximiliane Baumgartner’s edition is an extract from her wall installation The Lovers, the Studio, a Facade and their Perpetrators – Hof-Atelier Elvira (2021), which deals with the history of a Munich photo studio, the Hofatelier Elvira. The studio’s founders were the women’s rights activists Anita Augspurg and Sophia Goudstikker, who also lived as a couple. Its Jugendstil facade was created by August Endell in 1889 under commission from Augspurg and Goudstikker; the wavelike design was deemed radical by the public, and in 1937 the facade was removed from the building by the National Socialists in the course of the neighboring Entartete Kunst (Degenerate Art) exhibition. By bringing the history of the facade into the present day as a “pedagogical figure of thought,” Baumgartner converts its latent visual knowledge as a feminist and antifascist practice into painting, thus making it tangible. The edition takes the form of one of the studio’s windows. Baumgartner, who grew up in the Allgäu, has partially clad it in wooden shingles of the type that are sometimes used on facades; when arranged in a fish scale pattern, these make wavelike micro-movements in the wind. These seemingly simple studies interweave this rural construction material with the wave facade of the Munich studio, creating a metaphor in which adaption and rebellion are both equally possible.