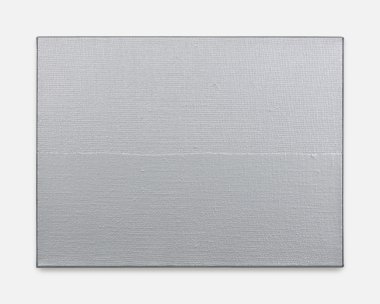 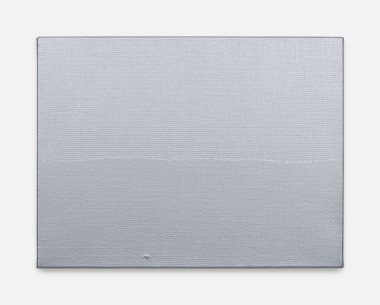 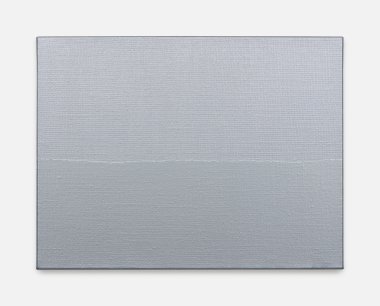 Once uttered, the sounds seep away to a hollow tone; the sequence of letters peels off the paper, one after the other. Like a chain, a fragmentary memory, it’s barely there and already gone. A hollow space that threatens to slip away in the continual dissolution.

Positioned alongside each other, the four unique works created by Paul Czerlitzki as editions for the Kunstverein Düsseldorf form their own horizon. It separates the visible and the distant. It carves the world up into a supposed end, which moves with every step we take, and the unknown beyond. Into an above and a below.

In an earlier series of bye bys, the artist applied paint to prefabricated canvases through small holes and cracks in plastic. Where the black paint touched the canvas, it would distribute itself in very different ways: Like ink drawings of exotic, narrow-branched trees. Others like basic algorithmic structures, emerging as a shadowy matrix on certain parts of the canvas’s surface. Like unwanted residue; remnants of paint that snuck its way into the film before settling on the canvas. Or as if applied by the stroke of a sabre, hair-sharp and surgically precise. This tentative application of paint places the bye bys in the tradition of the near-absent artistic gesture and the overriding of painterly processes. Like a flock of birds changing formation, their image planes are built of oppositions: both spontaneous and orchestrated, organic but still somehow synthetic.

Czerlitzki cut the packaging of the small-format canvases used for this year’s editions. Or rather: he sliced the membrane that packaged them across its middle with a flick of the wrist. The line is soft and slightly shaky. Fragile and yet hard in its execution. It forms a horizontal barrier between two separate fields of paint, marking the point where they merge with a doubling of the volume of silver. Silver is the most reflective of all metals in its pure and uncorroded state. It seduces and captivates the eye but also reflects it back, thus establishing its own dichotomy. The thing itself is omitted. It can be recognized in the line, which remains only as the accessory to an act. It is there where void and substance overlap. Like the movement in the title, which lends this gesture a tonality and a timbre.