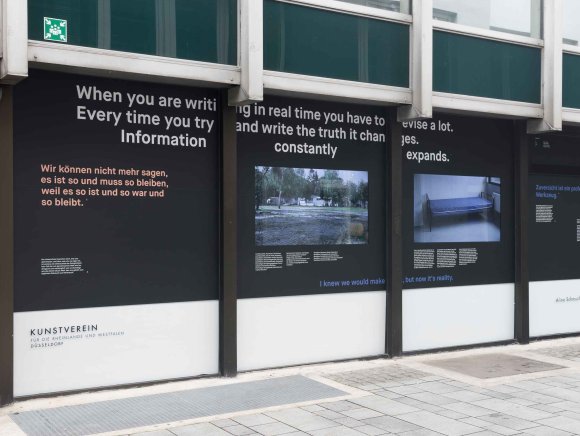 This is the Düsseldorfer model, which we had developed. Before you go around, you can do it later, I would like to explain the structure to you shortly.

We have single-story houses for 40 people. They are divided in the middle, so that we only have 20/20 per entrance. If you go in it, seen from me on the right site, you can find five rooms for persons, who travelling alone. Each with two beds, it means, there will be housed two persons. These persons have one community-kitchen, at the end of the floor, where there can feed oneselves and here opposite of it, there are the sanitary facilities. A separated shower, a separated toilet and there are rooms with washing machines, dryers and sinks, where they can feed oneselves, too.

Here in the middle area we have parking positions for baby buggies and at seen from me on the left site are the family rooms. Currently there are two large units. All of the rooms are accessible across the doors between, shiftable, that means, we can scale up and scale down depending on size of the family, who will arrive.