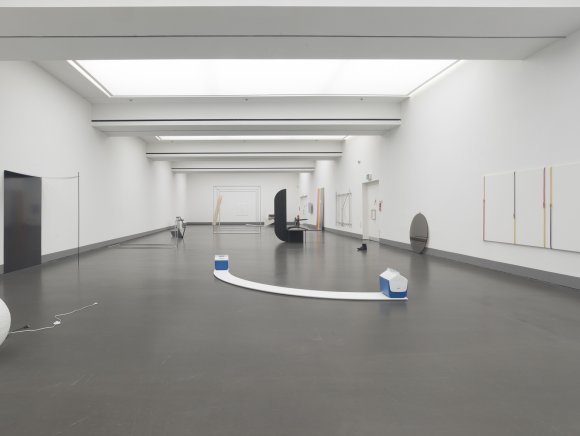 If one takes a classic narrative of 20th–century art seriously, things are categorically differentiated from all other things when they are allocated to the realm of art. This difference, however, is much less determinable on the things themselves than on the specific conditions of how and in which framework they are made use of from their production to their utilization ‘as art’. As such, the focus of attention first of all shifts away from the objects themselves to the social conditions from which they emerge as their materialisation on the one hand and how these conditions for their part again configure, for example through their specific use, on the other. But it then locks a special case into place: the mere ‘thing art’.

Stefan Wissel explicitly focuses on things in conjunction with his work since the early 1990s. His largely object- but also image-based pieces directly integrate everyday objects while also employing more uncommon materials. Functional and design objects are just as much used as coarse roof battens and galvanised metal profiles, the second-hand and the new, commodities and found items, furniture and articles of clothing, comparatively large objects such as a bicycle stand or small ephemeral one like a decal, purposefully purchased or borrowed at some time or other, and the pronouncedly material or the dematerialised, as it were, for example the harmony of various pieces of music.

The difference, indeed the absolute disparateness of these things as regards origins and use moreover correlates with diverse forms of working methods when Wissel ‘makes’ the objects himself in the almost traditional sense of sculpture or when he outsources their production in whole or in part to specialists, or when he simply ‘takes’ things and situations. The individual access, to be decided from case to case and consistently subjective, is in the process that which can most likely construct a common denominator between Wissel’s artworks.

For instead of being absorbed into a ‘thing art’, the thing that has tentatively been entered into an aesthetic experimental, as it were, individually or in constellation with other things, methods of production and use, becomes the setting for precisely this relationship between material and process, for the isolation in objectification and the shift triggered by productions, context, use, the things extending beyond themselves, employed in the service of probable or improbable purposes by whatever idiosyncratic means.

Stefan Wissel (born 1960) has lived and worked in Düsseldorf since the start of his studies at the Art Academy under Michael Buthe. His exhibition Bewegung 15. Juli at the Kunstverein für die Rheinlande und Westfalen unites works from a period of nearly twenty years and intentionally focuses on the artist’s (sculptural, three-dimensional) objects in the narrower sense. Both a retrospect and synopsis at the same time, this exhibition continues an examination of the “thing art” that began with Walter Swennen’s Ein perfektes Alibi exhibition.