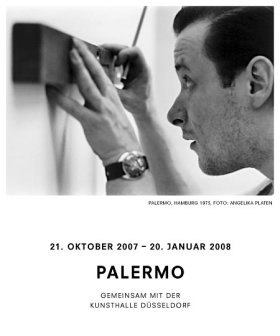 “Palermo, the name had been found and slowly it came to stand for the hand belonging to the greatest painter of this generation…”, wrote Georg Jappe in 1977, shortly after Peter Heisterkamp, who artist’s pseudonym was Palermo, died unexpectedly at the age of 33. The Kunsthalle Düsseldorf and the Kunstverein für die Rheinlande und Westfalen will celebrate their 40th anniversary in their home on the Grabbeplatz with an exhibition of his works specifically conceived to accommodate the spatial properties of the building itself. In conjunction with this celebration, which has been designed to render visible both the architecture as well as the institutions themselves, for which it was originally built, a comprehensive overview of Palermo’s (1943-1977) work is to be shown for the first time in the town that was at the centre of his life for so many years.