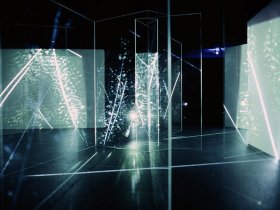 The group show Capital Glamour circles around the wholesale aesthetisization of the worlds we inhabit and their collective ambivalences. On the one hand it is about the transformation of entire cities into all embracing vehicles for advertising and on the other, the artistic engagement with such glamour-filled concepts, which are posited neither on an affirmative appreciation nor a simple critique of commodity aesthetics. The frequently conceptual character of the works distils for its part more the visual potential of these applied aesthetics taken from advertising and marketing strategies, rendering them accessible on the abstract level of replacement.