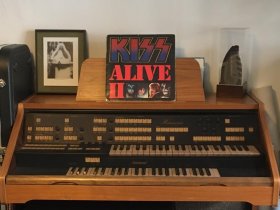 The event is being hosted exclusively via livestream on our website and will be held in English.

Time Experience Music is accompanying the exhibition Josef Strau – Spirits and Objects… and How Non-Productive Love Is Sometimes Contained in Them… , which was supposed to remain on view at the Kunstverein für die Rheinlande und Westfalen, Düsseldorf until November 22, 2020. We very much hope to be able to reopen the exhibition to the public in December, at least at for a short period.

For the fourth installment in the series of Düsseldorfer Kunstverein talks, Josef Strau invited the Berlin-based artist and composer Ari Benjamin Meyers for a discussion. Strau’s exhibition at the Kunstverein is his attempt to process motifs relating to his current interest in the theatricality of music and the philosophy of the time, among other issues. Far from having reached any satisfactory result, an attempt is being made to consult Meyers and employ his more far-reaching experience in such subjects, both in terms of theory and artistic practice.