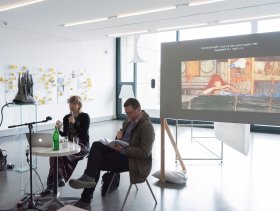 In Entgrenzer Formalismus Kerstin Stakemeier traces anti-modern forms of aesthetic praxis. From them she lays out an art history of self-abolition. Proceeding from the occult Symbolism of the late 19th century a contemporary aesthetic is proposed which refuses its modern heritage, degenerates it, makes it indecent, and collectivizes ist individualisms. An aesthetic in which art is proposed as a genuinely anti-social operation against the present. In the book the artists discussed by Stakemeier in many instances comment on her reading of their praxis. Bill Dietz, himself an author and composer will speak with her about the implications and outcomes of such an art of self-abolition. Together they will discuss the consequences of such an anti-systemic aesthetic.

Bill Dietz is a composer and writer, based since 2003 in Berlin. Since 2012, he has been co-chair of Music/Sound in Bard College’s MFA program. His work on the genealogy of the concert and the performance of listening has brought him to festivals such as MaerzMusik and die Donaueschinger Musiktage, museums such as Hamburger Bahnhof, Tate Modern and das Museo de Arte Contemporáneo de Oaxaca and publications such as Performance Research Journal, boundary 2, and the 2014 Whitney Biennial catalogue. In 2015 Tutorial Diversions came out and in 2017 Lécole de la claque, a collection of scores and essays on them by Chris Mann, MYSTI, Rachel O'Reilly.

Kerstin Stakemeier (Berlin/Nuremberg) is part of KLASSENSPRACHEN. She was the initiator of the Aktualisierungsraum (07/08) Hamburg (with Nina Köller), with Manuela Ammer realized the Conference But Something is Missing. Marxist Art History between Possibility and Necessity at mumok, Vienna (2015) and published a.o. anthologies like Painting-The Implicit Horizon (with Avigail Moss, 2012). She is a professor of art theory and mediation at the Academy of Fine Arts Nuremberg. 2016 Reproducing Autonomy (with Marina Vishmidt, textem/mute) came out. Entgrenzter Formalismus (b_books) is her first monograph.