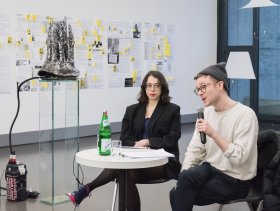 In their lecture Danny Hayward and Marina Vishmidt will discuss a taxonomy of self-dissolutions throughout the political spectrum and across class lines – the felt desire for an overcoming of the subject and the cultural representation of those desires. They will probe the question of what the language of proletarian self-dissolution might look like, and how the language of proletarian self- dissolution might sound.

Danny Hayward lives in London and writes poetry and political texts for Mute and other conglomerates. His recent poem about masked headless chickens and what happens when fascists open an art gallery next door is published by Shit Valley (2017). 2013 People
(Mountain Press), a compendium of poems, essays, and drama was published.

Marina Vishmidt is a writer. She is a Lecturer in Culture Industry at Goldsmiths, University of London and runs a Theory seminar at the Dutch Art Institute. Her work has appeared in South Atlantic Quarterly, Ephemera, Afterall, Journal of Cultural Economy, Australian Feminist Studies, and Radical Philosophy, among others, as well as a number of edited volumes. She is the co-author of Reproducing Autonomy (with Kerstin Stakemeier, Mute, 2016), and is currently completing the monograph Speculation as a Mode of Production (Brill, 2018).