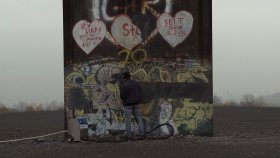 „I know very little about the Ruhr Region, in fact it is hard for me to pronounce its name – and I’ve never shot High Definition before. Yet I believe I have made a film true to my feelings of this place. Ruhr takes a look at some of the labor performed here and the processes controlled by that labor. It is about things that reoccur and the subtle changes that happen. It asks you to look and to listen.“ James Benning

James Benning’s work spans 50 years of creating uncompromising, singular films – one of which, PLACE (2020), is on view during the group exhibition CLOSER. To celebrate the finissage of the exhibition, the Kunstverein presents a screening of Ruhr (2009), a film Benning realized as one of his earliest with digital technology and his first one ever filmed outside of the US. A penetrating study of the Ruhr area, one of Germany’s primary industrial regions, Benning directs his camera at the steelworks in Duisburg, Richard Serra’s Bramme für das Ruhrgebiet (1989) at the Schurenbachhalde in Essen, a jumu’ah prayer in the mosque in Dusiburg-Marxloh, a small forrest in the approaching corridor of Düsseldorf airport, a deserted side road in Essen, or a tunnel traversed by very few cars. Ruhr is built upon a rigorous conceptual and formal structure, which reveals subtle changes and discoveries while things and frames repeat. It is both a portrait of the labor performed in this former working-class region as well as of the close connection between labor and culture – between the culture emerging from a specific type of labor and the labor that bears culture and works of art.