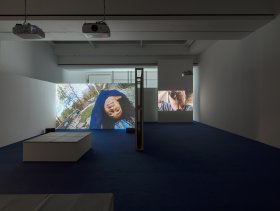 The current video and film exhibition CLOSER relations of intimacy and touch between film spaces and the physical space of the viewer. The contradiction in the concept of intimacy—connoting reassurance and stability, but also control—becomes highly ambivalent when in the presence of a camera. Comprising both existing and newly conceived works by James Benning, Alejandro Cesarco, Steffani Jemison, Park McArthur & Constantina Zavitsanos, Josiane M.H. Pozi, and Tiffany Sia, the exhibition provides space for moments of empathy and proximity between the viewer and the filmed, but also for the tensions and power imbalances that emerge when real experience is translated into an image. Conceptualized during the ongoing pandemic—in which it has been video technology that has so often provided a proxy for physical encounters—the exhibition explores the ability of filmed images to represent experiences of physical and emotional space and the limits at which they remain inevitably untranslatable and inaccessible. It both negotiates and interrogates recent reflections on the camera as an omnipresent proxy or stand-in for communication and interpersonal encounters, while also taking the same approach to the (apocryphal) promise of connection and immediacy that is implicitly inscribed into digital communication.