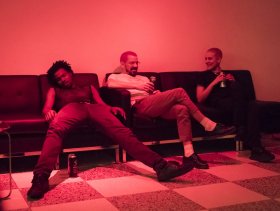 In textual works, photographs, videos and performances, Dudu Quintanilha deals with the body as a field of work and representation beyond normative orders. He works on questions of performativity, community and marginality and transforms them into collaborative negotiation and working processes. The starting points are so-called “performance meetings”: body-related improvisations, polyphonic dialogues and joint walks through urban and peripheral spaces. Videos and performances are used to interweave these encounters and the related forms of action and negotiation of bodies and language.

For Physical Education II, Quintanilha develops with Lunatic a performative procession to explore the possibilities of thinking and feeling through motion. In collaboration with dancer Rickey Bellot, musician and performer Tomás de Souza and dramaturge Carolina Mendonça, the performers will dance, sing on top of lyrics and repeatedly confirm to each other “having come to the wrong party”. Delicately and humorously they deal with the idea of following and directing each other. The performers wet their bodies from refilled cans, help each other to do so, and try to contain water by forming their hands into vessels. Cans become objects that transition not only in space but also in use and meaning. Voices exhaust the word “sorry,” imitate machines or sing romantic reggae songs. The movements of the performers* through the spaces of the institution as well as through the surrounding urban space forms the basis for a reflection on appropriation, masculinity and care.

Elbow Room has been conceived as a performative continuation of the former Schaufenster (display window), which the Kunstverein used to offer young artists their first exhibition opportunities. Elbow Room opens temporary, physically variable intermediary spaces at regular intervals in order to try out and renegotiate various staging formats. The stairs in the entryway, the Kunstverein’s foyer with its bar and panorama window, parts of the exhibition space, even the Salon des Amateurs and the neighboring urban environment will thus be transformed into sites of physical education. Inspired by the idea of rethinking the body and its organs in a flexible and decentralized sense, beyond normative attributions, the title suggests the possibility of creating spaces of action and staging with one’s own body. The elbows, in an expanded sense, thus become the catalysts for stretches and physical exercises that aim to create spaces of play; spaces of play which, in the context of the Kunstverein, offer brief glimpses into ongoing research and developing projects as well as temporary stages for completed works. This year’s edition of Elbow Room, Physical Education I–III, has been developed in close collaboration with Eva Birkenstock, Gesa Hüwe, and Victoria Tarak.