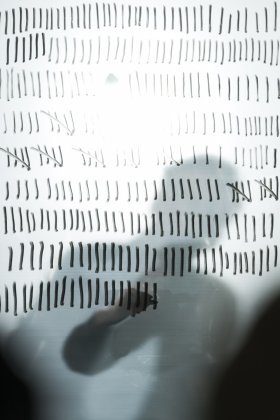 Leda Bourgogne’s artistic work is shaped by her interest in psychoanalysis, philosophy, literature, and feminist thought. In object-like images, poetry, and sculptures, she reveals the structural perversions of normative desires, identity constructions, and power relations while also showing the indistinguishability of spaces intimate and public, political and private.
She takes her new performance Punchdrunk as an opportunity to transform the systems of order, the architecture, and the codes of conduct inscribed in the recently reopened Salon des Amateurs into a poetic-performative space for negotiation. By overlaying the spaces with text and sound collages, she inscribes the nightclub onto the ground floor of the Kunsthalle with a rhythm-inducing soundscape, activating the influence of bodies on spaces and of spaces on bodies. The associated border zones, gaze regimes, and modes of action are intensified, neutralized and recoded in this process. For the artist, heterotopic spaces such as the Salon des Amateurs are interspersed with social orders and categorizations, but they always harbor a subversive, unruly potential always open to being affected, not least by bodies – interspersed, as it were, with inscriptions and disciplinary measures – as venues for stubborn and subversive practices. Via the inner monologue of an “unreliable narrator,” Bourgogne interrogates hegemonic classifications of desire and, with her notion of bodies as conflict-laden zones, also opens up references to the exhibition Maskulinitäten.

Elbow Room has been conceived as a performative continuation of the former Schaufenster (display window), which the Kunstverein used to offer young artists their first exhibition opportunities. Elbow Room opens temporary, physically variable intermediary spaces at regular intervals in order to try out and renegotiate various staging formats. The stairs in the entryway, the Kunstverein’s foyer with its bar and panorama window, parts of the exhibition space, even the Salon des Amateurs and the neighboring urban environment will thus be transformed into sites of physical education. Inspired by the idea of rethinking the body and its organs in a flexible and decentralized sense, beyond normative attributions, the title suggests the possibility of creating spaces of action and staging with one’s own body. The elbows, in an expanded sense, thus become the catalysts for stretches and physical exercises that aim to create spaces of play; spaces of play which, in the context of the Kunstverein, offer brief glimpses into ongoing research and developing projects as well as temporary stages for completed works. This year’s edition of Elbow Room, Physical Education I–III, has been developed in close collaboration with Eva Birkenstock, Gesa Hüwe, and Victoria Tarak.