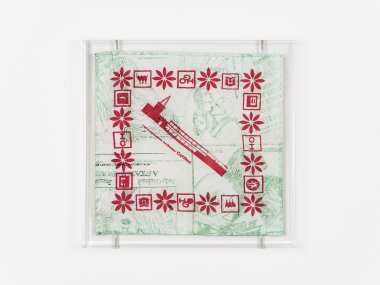 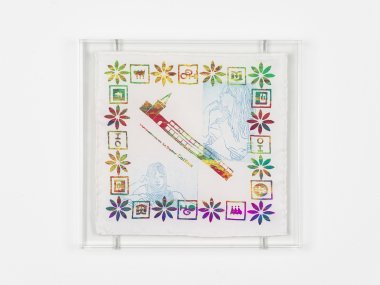 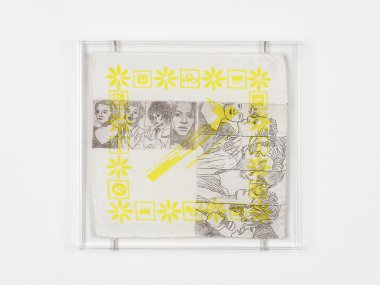 The practice of the artist Josefine Reisch focuses on conventions of self-portraiture in different historical and ideological contexts, examining the power-political and patriarchal implications of representation from a feminist perspective. The resulting paintings, installations, and textile works collage a wide range of references that includes both the Renaissance and contemporary eras, literature and pop culture.

In her series It’s very difficult to keep the line between the past and the present. Do you know what I mean (2020–), Reisch picks up on the tradition of the commemorative scarf. These were produced and distributed in the GDR to mark occasions such as military parades, sporting events, youth congresses, and the openings of multi-purpose halls. The three scarves selected for the Kunstverein were each created using a combination of screen-printing and etching, overlaying elements of the original East German designs with film stills of actors from different versions of the American epic A Star Is Born and a family photo of the artist’s grandmother. With this, different systems of reference and competing political and personal narratives begin to mix, each with its own rites of self-affirmation and (stereotypical) role models of femininity. This not only sounds out the terrain between the capitalist hyperindividualism of the American Dream and the celebrated socialist collective body, but also the artist’s own self-understanding, which both spheres of influence have shaped.