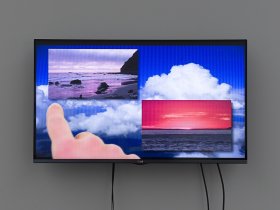 Whose Subject am I?

The expectations and demands we make on art both socially and individually are as numerous as they are diverse. What they have in common is the need for concrete solutions and answers, for an effect of the immediately accessible, identificational and exploitable – not only as regards aesthetic questions but also with a view to concrete social problems and their inextricably linked technological problems. And we also expect from artists that they serve as seismographers if not interpreters of their times. Fitted with diffuse sensibilities and uncertain competencies, can they really anticipate answers to something even before this something has even been able to be precisely formulated in the first place?

The thematic group show Wessen Subjekt bin ich? / Whose Subject Am I? deals with this somehow understandable and yet obviously impossible demand made on art. It does so by inquiring after the essence and functionality of subjectivity in the wake of a digitalisation comprising ever larger spheres of life, including its long since irreversible effects on what is produced and circulated as art in particular. The exhibition confronts the problem that inevitably results when philosophical, political and social models clash with each other under the premise of art in conjunction with an exhibition – a space that is readily comprehended as an exceptional aesthetic state und accordingly ideally accessible without presuppositions.

Works are brought together in the exhibition that, whether produced digitally or analogue and employed structurally or as a narrative, derive from diverse discourses and are represented for example in the form of a computer program or as traditional panel picture and not only remain ‘disparate’ upon a second glance. They consequently resist the generalising need to transfer one‘s own individual responsibility to art that has been turned, so to speak, into an all-purpose surrogate. They instead argue in favour of comprehending this as a zone of cultural, social and economic production and exploitation. As a possibility of the ‘subjective’ participation in art as a historically evolved and socially comprehended formation based on individual objects is not the promise of a redemptory conclusion. It can instead only represent the beginnings of respective dealings with the mechanisms of one‘s own positioning and indeed also the production of subjectivity.

A series of event featuring lectures by Hans ­Christian Dany (12 May), Marina Vishmidt (13 June) and Kerstin Stakemeier (5 July) serves to further explore the themes treated within the exhibition in addition to arguing in favour of the separation between artistic and theoretical perspectives.

In the course of, Tyler Coburn will perform I’m That Angel at a data center in Düsseldorf on July 7th and 8th.