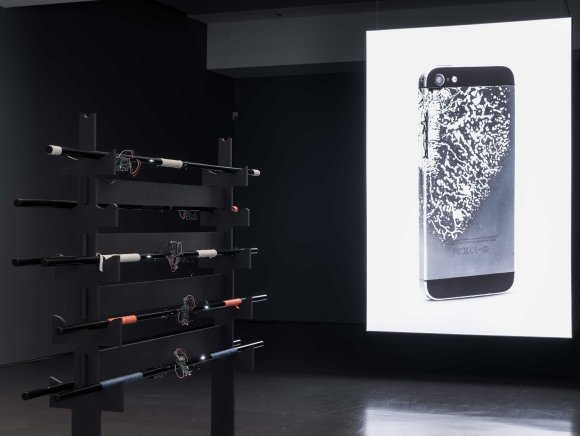 The working method of the Berlin-based artist Johannes Paul Raether could be described as the activity of a psycho-realist Identitect. Since 2009, he has designed a growing, multigenerational set of constructed personas, Avataras, and SelfSisters. As beings personified by Raether, they appear in installations, in public spaces, in laundromats, in Times Square, at Ikea, or at the Brandenburg Gate in Berlin. They take research trips to India, Iceland, or Scotland, and regularly issue invitations to techno-magical rituals. The individual identities of this Identitecture each constitute their own research units: Transformellae – Queens of the Debris that illuminate the future of globalized and industrialized forms of human propagation and their relationship to capitalist production in an era of artificial insemination, pre-implantation diagnostics, and foster motherhood. The Swarm-Being of the infected metropolises seeks out sites of intersecting movements of migrants and tourists, in order to collect traces of a transnational circulation of bodies as well as placeless “souvenirs”. The Smurf-like world-healing witches Protektoramae attack the spectral empire of capitalist relations of production during times of gigantic commodity flows.

Protekto.x.x 5.5.5.1 Precipitation, the title of Raether’s solo exhibition at the Kunstverein, is also the name another one of his drag characters from the lineage of the world-healing witches. The witches’ central thesis is that humanity is possessed by the abstract principles of capital and has developed into a prosthesis of its own communication devices. Like her predecessor Protektorama, Protekto.x.x interrogates and analyzes the relation of the human body to screens and displays, and addresses the materiality, fabrication processes, and sites of production of contemporary information technologies. Protekto.x.x was introduced to a broader public in July 2016, when her ritual research-maneuver in the Berlin Apple Store led to a police intervention and lurid reports in the media. Beforehand, the participants were given a ring made out of the technological metal gallium, which was liquefied in the shop over the course of this moderated techno-alchemical ritual. Gallium is an important material for this witch, given that it melts at body temperature and yet is not dangerous to the carbon-based hands of human beings. However, this sister metal disintegrates aluminum, from which the surfaces and skeletons of cellphones, tablets, and computers are made.

For his exhibition in the Kunstverein für die Rheinlande und Westfalen, Raether transfers this manifestation of his world-healing witch into a complex, sculptural-spatial ensemble – a further development of his contribution to this year’s Transmediale in Berlin. An audio track introduces visitors to the witch’s research fields and critical linguistic findings, and thus makes them participants in this techno-philosophical ritual. Molten gallium, metallurgically recycled devices, and items of orphaned witch paraphrenalia conflict with the presentation’s unmistakable Apple Store aesthetic. Together with Protekto.x.x’s audible speech-sequences, they create a common cosmos, in which the Apple products appear as the archaeological relicts of a distant past.