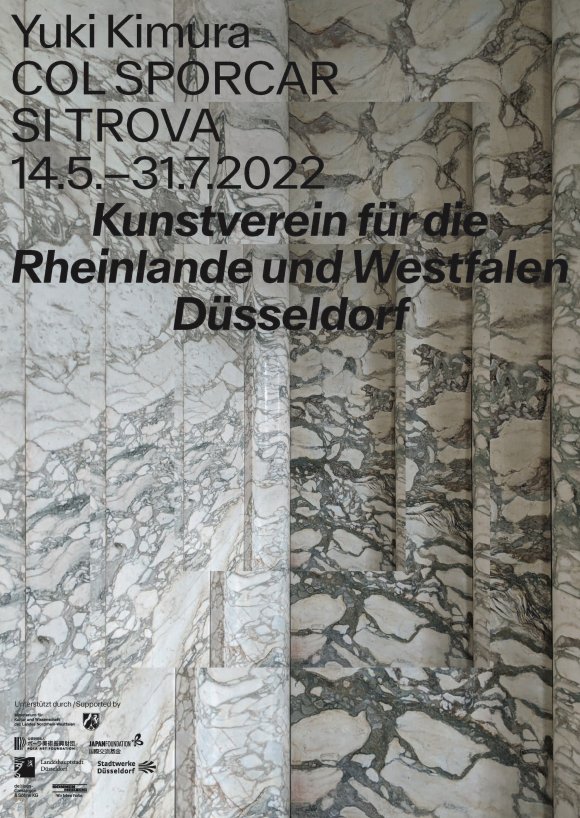 COL SPORCAR SI TROVA brings together newly produced works by Yuki Kimura (b. 1971 in Kyoto, lives and works in Kyoto and Berlin) in a site-specific installation that intervenes in, manipulates, and subtly shifts the spatial dynamics of the Kunstverein. For her debut solo institutional exhibition in Germany, the artist stages illusionistic effects within the exhibition space that draw upon her installative practice of recent years; this sees various readymades multiplied at various scales with hallucinatory effects, thereby raising questions concerning the mechanics of vision, presence and physicality alike.

In a striped wall painting, Stripe (2022), which encompasses all four of the exhibition space’s walls, Kimura confronts and plays upon an architectural curiosity within the Brutalist exhibition building from 1967: the bulky and prominent horizontal beams that traverse its rooms, decisively shaping the spatial experience of the exhibition space. The beams house the Kunstverein’s heating and ventilation systems, with open horizontal slits that allow air to circulate. Kimura’s original idea of concealing these slits between the black painted stripes eventually (and deliberately) produced the opposite: a hallucinatory multiplication and exposure of this architectural form. In 1927, the Viennese architect and polemicist Adolf Loos (1870–1933) created an eccentric but ultimately unrealized proposal for a private residence for the jazz singer and dancer Josephine Baker, with a signature façade that similarly featured black-and-white stripes. In a gesture of spatial inversion, Kimura’s striped walls on the inside of the gallery reverse the relationship between outer shell and interior, and between volume (positive space) and negative space.

Alongside it, Kimura presents new sculptures, whose plinths are decorated with Tromp-l’œil renderings of marble textures that continue the play with black-and-white and positive-negative contrasts. They demonstrate both the complexity of highly skilled manual work and the seductive potential of the entirely artificial, of illusion and decor. The artist thereby alludes to the complex and politically contested role of decoration and craft within art and architecture, conscious of the fact that notions of dematerialization and deskilling have exerted a decisive influence on (post-) Conceptual art practices (including her own), and that manual skills are often devalued in this context.

Like her earlier readymade works, her new sculptures use multiplication and scaling to destabilize the perception and appearance of an object. In Five Mirror Balls (2022), the eponymous object reflects the surrounding space in miniature and distorted form through a fisheye perspective. This view reveals an invisible space-within-the-space, or a sort of magic and expanded sight. Just as optical effects of positive-negative-contrasts reveal the different realities of an object, Kimuras modifications of spatial experience bring supposedly stable physical parameters (such as size, weight, material, length/width/height/depth) and the relationship between interior and exterior space into motion in a profound way.

COL SPORCAR SI TROVA is accompanied by an existing work, Wardrobe Extensions, which is displayed in the foyer; Kimura has been continuously exhibiting the work since 2016, rearranging and reactivating it each time depending on the context. The exhibition will also be accompanied by a series of events, to be announced on our website, and by a forthcoming catalogue.