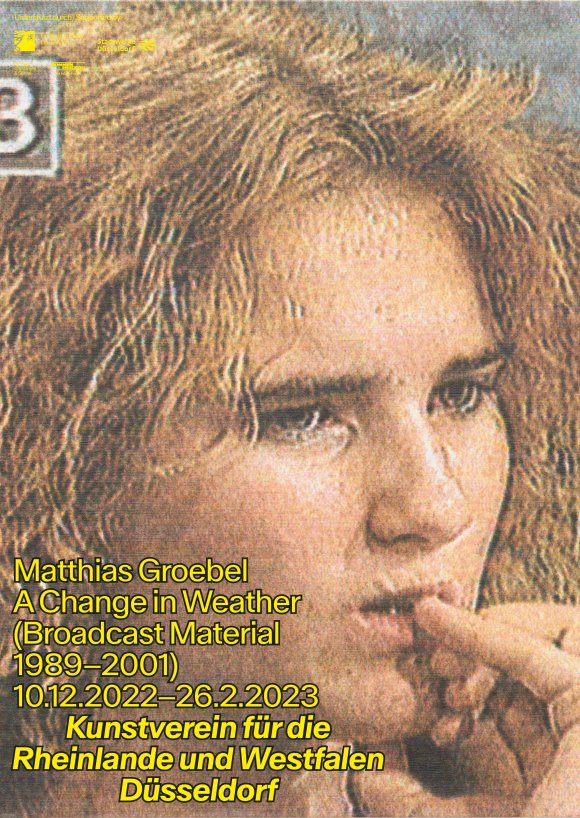 A Change in Weather (Broadcast Material 1989–2001) is the first comprehensive exhibition of the work of the Cologne-based artist Matthias Groebel (b. 1958 in Aachen, DE). Over the past four decades, and largely without institutional recognition, Groebel has created a unique oeuvre featuring paintings based on images from television, along with drawings, photographs, videos, and research works. As a trained pharmacist, Groebel came to art in the early 1980s as an autodidact. It was during this period that private analog satellite television spread throughout West German households, allowing unprecedented round-the-clock access to a wide range of international television programs. Groebel’s works reflect this new media condition of open-access television, which directly paved the way for the subscription-based streaming and pay-per-view services of today.

A Change in Weather (Broadcast Material 1989–2001) focusses on a selection of the roughly 200 paintings Groebel produced between 1989 and 2001. All based on appropriated analog television stills, the works differ from conventional paintings primarily in their machine-assisted production process. In the late 1980s, Groebel developed a machine that allowed him to transfer images from the television onto canvas, a complex process involving multiple stages and applications of paint with an airbrush pistol. Groebel’s production process played on a reciprocal and closely intertwined relationship between artist/painter, technology, and generative form-finding in an era of profound technological change and the digital turn. The paintings are based on what were ubiquitous images in the media of the time – simultaneously generic and highly suggestive – and have, as the artist himself says, “an effect, even when you don’t want them to.”

Groebel’s paintings offer a precise portrait of the televisual landscape of the 1990s and its specific mixture of voyeurism, reality TV, permanent self-staging, and surveillance. They convey a feeling for analog television’s hypnotic spaces of experience – its flickering, backlit, and low-resolution images, its abundance of talking heads and close-ups of bodies and body parts, and its transgressive intimacy. Where the Hollywood star on celluloid seemed unreachable, television projected a sense of familiarity and openness – a sort of seeing, speaking surface that looked out at us from within the device. His images have a mysterious physical presence and convey a powerful sense of psychological latency, bringing out the subtle tensions and power structures inherent within a gesture, a gaze, or the biting of nails, often contrary to the intrinsic and profit-driven agendas of the entertainment industry.

The exhibition architecture takes up the idea of being pulled in, and of information overload, evoking associations with media archives and collectively stored knowledge; or the collective medial unconscious.

On the weekend of February 4 and 5, 2023, the Kunstverein will host a program of events to accompany Matthias Groebel’s solo exhibition. It includes contributions by the British cultural theorist Sadie Plant, the German author and artist Hans-Christian Dany, as well as a performance-concert by the US-based experimental musical duo Jack Callahan and Jeff Witscher.

The Kunstverein is supported by Landeshauptstadt Düsseldorf, de Haen-Carstanjen & Söhne, and Sonnen Herzog. Stadtwerke Düsseldorf is permanent partner of the Kunstverein.