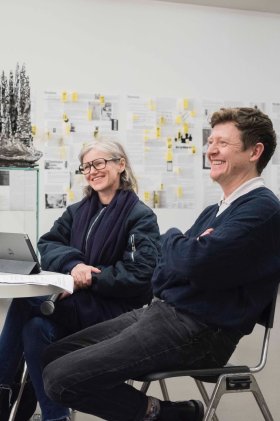 The allegedly neutral and standardized “work description” is ubiquitous in relation to art works: We encounter it in wall texts, in criticism and in the context of art education. Mostly, it is considered a necessary evil, a means to an end or as tedious groundwork for the shaping of opinion. Conversely, one may claim work descriptions as the foundation of any communication about art: What they acknowledge or ignore, how they evaluate and structure, which (language) barriers they create or remove, determines access to the work in question. In this open format Bibby and Widman each present to one another a “work” of their choosing and discuss the aesthetic, social and personal functions of work descriptions as a process in which the real and the fictional, the self and the other can enter into new and unexpected connections.

Gerry Bibby works between the boundaries of language, performance and sculpture. In the last years he increasingly engaged with different text forms: from stories and scientific reports to manuals and poems. 2014 his artist book The Drumhead (Sternberg Press) was published. His works were most recently shown at Deborah Schamoni (Munich); Taylor Macklin (Zurich), the Showroom (London) and in various group shows a.o. Section Litteraire, Kunsthalle Bern, Swiss Institute Rome and the Biennale of Sydney’s Bureau of Writing, at Artspace, Sydney. He is currently co-Editor of the Berlin magazine Starship. The Talk by Gerry Bibby and Tanja Widmann was part of the exhibition CLASS LANGUAGES. Exhibition, Magazine, Debate, on view from November 11, 2017 – February 4, 2018 at Kunstverein für die Rheinlande und Westfalen, Düsseldorf.

The presentation of the video documentation is part of our endeavour to activate the Kunstverein's new website not only as an archive, but as much as a site of participation, debate and production. In addition to announcements of events and exhibitions, it will offer documentations, ephemera, archive records as well as new artistic productions from the Kunstverein's long history.