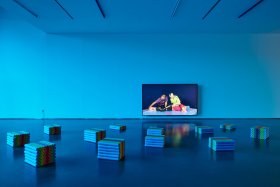 Viktor Neumann is an art historian and curator. He has curated exhibitions and projects for institutions such as the Whitney Museum of American Art in New York, Bildmuseet Umeå, Kunstmuseum Bonn, National Centre for Contemporary Arts in Yekaterinburg, and Künstlerhaus Stuttgart. He was Curatorial Assistant for documenta 14 Public Programs and Assistant Curator for the 3rd Moscow International Biennale for Young Art. Recently, he was member of the curatorial core group of the Bergen Assembly 2019, co-curator of the Parliament of Bodies and curatorial fellow of the Gebert Stiftung für Kultur in Rapperswil. Currently, he is co-curating exhibitions for the Württembergischen Kunstverein, Stuttgart and Total Museum, Seoul and is, together with Eva Birkenstock and Nikola Dietrich, co-curator of the project reboot: at Kunstverein für die Rheinlande und Westfalen, Düsseldorf and Kölnischer Kunstverein, Cologne. Since 2020, he is Guest Professor for Curatorial Studies at Karlsruhe University of Arts and Design.

The event is being held in German. Admission: 5 Euro / 3 Euro (reduced). Free Admission for members.