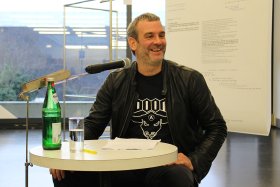 In his lecture on the Concept of Class Frank Engster will reconstruct the mutative history of this concept and its political applications. Developed as a verbal medium of the emancipation of a social group that had only come into existence as a result of capitalist production, the affirmative identification of class and the critical account of its necessary abolition soon began to deviate from one another. It is these conflicts between the orthodoxies and heterodoxies within the concept of class which Engster in his lecture will trace into our present.

Frank Engster is the author of Das Geld als Maß, Mittel und Methode. Das Rechnen mit der Identität der Zeit (2014) and published widely on the nexus of measure, money and time as well as on the intersection of epistemological and social critique. 2011-2012 he was a junior fellow at the Postwachstumskolleg of the Friedrich-Schiller-Universität Jena, and subsequently a research associate at Helle Panke e.V. – Rosa-Luxemburg-Stiftung Berlin as well as project coordinator of the Institut Solidarische Moderne e.V. and Marx200.org.