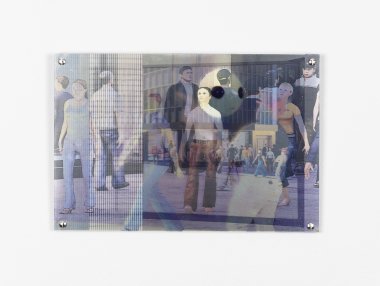 With its sharp-edged surfaces and gleaming screws, this photographic work by the artist duo Tobias Hohn and Stanton Taylor recalls the material aesthetic of doctors’ offices, real estate developers, and department stores. As with many of the artists’ recent works, it draws on scenes of nominally public spaces that are actually entirely structured by private and commercial interests. During the corona lockdown, the artists began surveying the now suddenly closed and barricaded window displays in Düsseldorf’s and Berlin’s city centers. In this state of forced standstill, where the shopping streets seemed to have finally been replaced by virtual experiences, their rules seemed unusually explicit. In the Service of Reality (a message for the public) (2022), for example, responds to the vinyl hoarding found on a construction project, which features digital figures with eerily blank expressions admiring a rendering of the completed building – as if demonstrating to the humans who saw it how they were expected to behave.

But where inner city advertisements serve to cover up the political and environmental entanglements of their products with markedly simple messages, Hohn and Taylor search for the opposite: for photographic forms that express the internal contradictions of a consumer culture stretched to its limit. Here, shiny and translucent materials are not symbols of cleanliness and transparency; instead, they allow the bodies of various figures to fuse with one another, and with walls and floors. It’s scarcely possible to discern with any certainty whether the depicted scene is indoors or outdoors. In fact, it’s not easy to make out any implied action or somehow motivated actors at all. Where the Surrealists once sought to break through the borders of individualism using analog double exposures, Taylor and Hohn use a mixture of digital and physical tools to demonstrate how consumer culture has itself been working for a long time to dissolve individual characteristics, very differently but by no means less successfully.