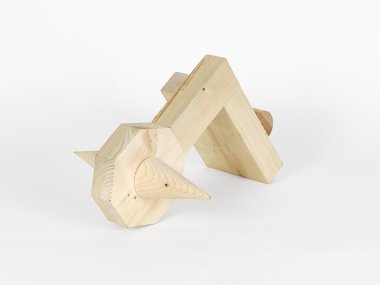 The work of the Chicago-based artist and educator Pope.L stands up for a “troubled culture” [https://bombmaga- zine.org/articles/william-pope-l/]. In his latest site-specific projects, whether at documenta 14 in Kassel, Portikus in Frankfurt am Main, or most recently the Schinkel Pavillon in Berlin (from where this edition comes), Pope.L addresses the societal cracks and incongruities that are manifested through political and historical hegemonies and their resulting practices. Whether it is the architecture of the city with all its meaning and power, the specific patterns of behavior that exist within a society, or the attributive gaze of others, Pope.L’s performances, interventions, and collective events have broken through usually rigid formulas since the late 1970s.

His edition for the Kunstverein Düsseldorf is a wooden model that combines different architectural elements of buildings in the historic area surrounding the Schinkel Pavillon in Berlin: the neighboring Humboldt Forum, housed in the formerly destroyed and newly reconstructed Stadtschloss palace; the Schinkel Pavillon, constructed in the 1960s; and the Neue Wache, built by Karl Friedrich Schinkel in the early 19th century. During the exhibition, this model was repeatedly fed into a woodchipper as part of a performance. Like his creation of an architectural and historical amalgam, its demonstrative destruction in the woodchipper should be understood as an act of critique: of how history is dealt with, received, and categorized, and of those who assume they have the authority to interpret it.