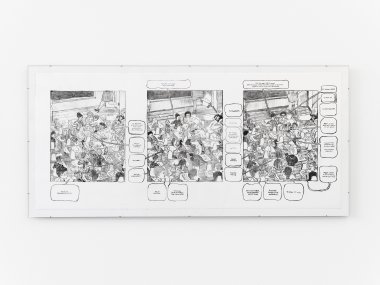 A swarming chatter, a free bustle before the teacher arrives in class and imposes quiet, focus, sequence: isn’t this a miniature of what is most powerful in infancy, as well as of that which demands that it doesn’t last for too long?

Jorge Loureiro’s — No fundo… — No fundo do fundo… — No fundo, no fundo… (“—Deep down… — Way deep down… — Deep, deep down…”) features lines from Marguerite Duras’s Ah! Ernesto, the story of a boy who refuses to return to school, appalled at the idea that his infantile unknowing should be overridden. But the dialogue, which in Duras’s book tells the singular story of Ernesto, is here shuffled over the many children and thrown gently out of order. The whole classroom thus becomes one pulsation, one collective instance of that infancy which, in the story, struggles against the coming of maturity.

For what is infancy? Higher talent of the child, but not her privilege, there is also infancy to what we make, what we think, how we live. It is the element of all beginnings: that plastic eternity around what has not yet been initiated, not yet learned to speak to and for the public. The child who plays does not pretend her toys are a house, a person, a car, herself a singer or a monster; she lets them be so. Actuality and possibility hang together until she learns to speak as everyone does, about what everyone knows.

Infancy waits for language, even searches for it: yet this search is not its essence, but an incandescence. It burns, flares, consumes itself in joyful disquiet… and is over. When its subject becomes sayable enough, when its speech interlocks with the speech of others, when it thereby finds itself — then it has matured, and becomes capable of entering the domains of history and politics, of organized knowledge and incremental action, of society and memory. Thus is the paradox of infancy: it would always like to continue, forever imminent, forever open; but it is only after the beginning has been exhausted that one can really begin.