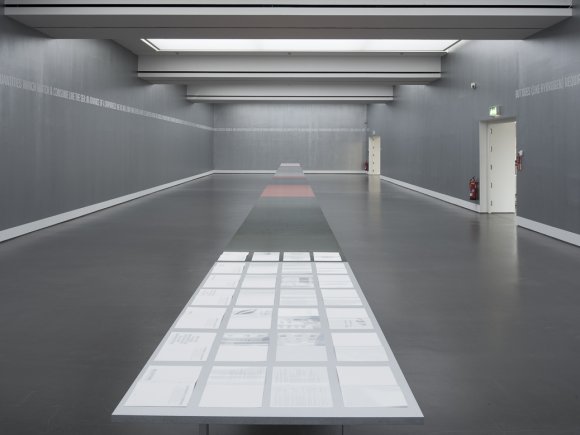 IN ADVANCE OF A SHIPWRECK:
Studio for Propositional Cinema

“I gather these texts to prove that I am not alone. That others, seeing my game, will become allies. For them, I put my cards on the table.” – Louis Aragon, J’abats mon jeu, 1959

IN ADVANCE OF A SHIPWRECK: is both the title of the exhibition by Studio for Propositional Cinema at Kunstverein für die Rheinlande und Westfalen, Düsseldorf, and of a text which encircles and traces the architecture and gallery space of the latter – beginning outside on the Kunstverein’s “Schaufenster” (its permanent display venue in the public space along Neustraße), continuing along the windows of Buchhandlung Walther König, running up along the signage on the façade, entering the lobby and finally the actual exhibition space. In its subject matter the text foregrounds the increasing political urgency for spaces for the distribution and mediation of resistant cultural forms within a context that seeks to dilute or deactivate them on the one hand (the equalizing machinations of mass-culture), and to annihilate their entire history and potential futures on the other (the ideological end-game of religious fundamentalisms). Literally and figuratively it is this text which frames the presentation and its institutional contexts, while acting as a central element of the exhibition itself.

IN ADVANCE OF A SHIPWRECK: comprises three temporal aspects which unfold over the course of this exhibition in progress. The first is a series of exhibitions in the Kunstverein’s Schaufenster of posters, ephemera, and works dealing with forms of publicity, beginning with a survey of Studio for Propositional Cinema’s exhibition posters (beginning 24 October) and continuing with Palermo and Sigmar Polke (8 November – 20 November), Sarah Kürten (22 November – 4 December), Feminist Land Art Retreat (6 – 18 December), Nicolás Guagnini (20 December – 1 January), and Roy Arden (8 – 29 January). In the main exhibition space a new series of 73 small publications will be presented, each produced in close collaboration with the artists, collectives, and writers who have contributed to past exhibition projects of Studio for Propositional Cinema, including its_ Inaugural_ project at the Kunstverein in Düsseldorf, projects at mumok, Vienna, and Kunsthaus Bregenz, as well as at their exhibition space in Düsseldorf’s Ackerstrasse. The individual publications are issued one after the other and added daily to the exhibition. The show will additionally be punctuated by a series of events, including a performance of Scenes at an Inauguration by Keren Cytter & Studio for Propositional Cinema (at the opening on 28 October, 8 p.m.), egal, a new play by Sarah Kürten (22 November, 7 p.m.), Paul Sharits: Prescription and Collapsed Temporality by Tony Conrad (6 December, 7 p.m.), and a lecture/reading by Aaron Peck (at the closing event on 8 January, 6 p.m.).

Studio for Propositional Cinema is anonymous, individual and collective. We are simultaneously part of it and estranged from it. It was inaugurated in 2013 in the context of the performance-event Proposals and Propositions at the Kunstverein für die Rheinlande und Westfalen, with a manifesto-like speech proclaiming: “We are for production and the negation of production. We are for distribution and the negation of distribution. We are for reception and the negation of reception. You do not want us, but we are already inside your head.” Since then their activities have taken many forms, including an exhibition space in Düsseldorf, various publishing projects (including Papier und Gelb, a bookshop in Düsseldorf started in 2015 together with Rhein-Verlag), sustained collaborations with other artists such as Keren Cytter, Alex Wissel/Jan Bonny, and Gaylen Gerber, as well as several exhibitions, realized both individually and together with a loose network of other artists and cultural producers whose concerns, activities, and ideals intersect with their own. Most of these projects are grounded in language, presented variously through speeches, performances, signage, manifestos, titles, and press releases.

IN ADVANCE OF A SHIPWRECK: as an artistic and curatorial project marks both an end and a beginning. Programmed by the ex-director of the Kunstverein, Hans-Jürgen Hafner, and co-curated with Eva Birkenstock, the exhibition loosely links the past 5-year cycle of thematic and monographic exhibitions of the former, with the new program soon to be introduced by his successor, who organized an exhibition project with Studio for Propositional Cinema at Kunsthaus Bregenz this past June.

Foregrounding the distribution and exhibition of texts and artworks within a context of collaboration and confluence, IN ADVANCE OF A SHIPWRECK: attempts to frame these activities in the hope that their actions, as they write, may, “like gulls or whales, like winds or waves, be strengthened through quantity and may, in turn, humidify or evaporate in order that the ostensibly inevitable may be evaded, or may be delayed, or may be revealed as tenuous constructions: like a hurricane coaxed to the breeze, like a tsunami diluted to a ripple, with still enough power to erode, if there is still enough time to do so”.

Scenes at an Inauguration
Keren Cytter & Studio for Propositional Cinema