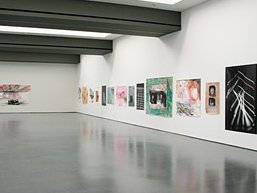 The painterly research of Amelie von Wulffen intermingles her own and common history, the inside with the outside and points to different traditions on which present-days dissolving society is based on. Cultural history and politics meet one another in traumatic places and ruins; objects of memory span an imaginary network between Dürer, Seurat, Solschenizyn, John Travolta and her own grandmother.

Von Wulffen is most notably known for her collages: photographs mounted in a central position are expanded through painting and dissolved into abstract compositions. She prolongs in parts direct biographical references and motives taken from art history into the exhibition space and cross-fades the different levels on which artist and viewer experience the work.