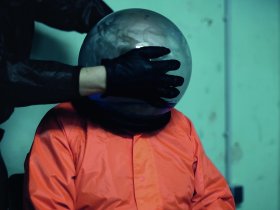 Drawing on her role as an artist, Kasia Fudakowski (*1985 in London) uses self-imposed rules to push inequalities, stereotypes, and a warped social logic beyond the point of absurdity. As with the exhibition cycle Fraustellungen (Femalexhibitions), which concluded in 2015 with Sexistinnen – Excersises in Self-Sabotage – a self-ironic, staged performance made together with her gallerist at Art Basel. Or with Double Standards – A Sexhibition (2017), which presented viewers with the choice of entering either the left or the right door to the exhibition without knowing what to expect in either case; a reaction to the UK referendum which forced citizens to vote either ‘Yes’ or ‘No’ without being provided with detailed information on the consequences of their decision.

Boiling Frogs at the Kunstverein focuses on both the comedic potential and tragic limitations associated with mechanisms of adaption. In light of the parable that lends the exhibition its title, this capacity to adapt (one of humanity’s great strengths), seems to be an index of its downfall: what is described, here, is an experiment in which the adaptive aptitude of frogs prevents them from recognizing the deadly danger of the gradually increasing water temperature in a cooking pot, thus preventing them from jumping out in time.

With Continuouslessness (2017 ongoing), an oversize screen sculpture which snakes through the exhibition space, Fudakowski dissolves this opposition between potential and limitation, through proposing the continuity of non-continuity: even if the individual elements of the work are necessarily limited and shaped so that they can be connected (in order to stand up and continuously grow), equally Continuouslessness delivers an unlimited space for the deployment of materials, forms, and ideas.

Through its work with absurd limits, Boiling Frogs reveals the tragicomic nature of exaggerated adaptive mechanisms.

The exhibition is accompanied by an extensive program of events, including lectures, guided tours and an artist’s talk.