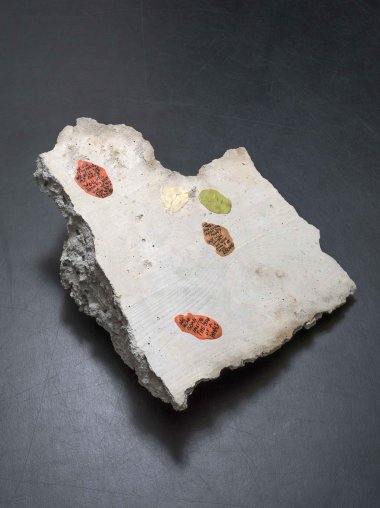 Leda Bourgogne’s artistic work is characterized by an interest in psychoanalysis, philosophy, literature, and feminist thought. In her object-like paintings, poems, performances, and sculptures, she interrogates the nature of nonconformist desires as well as the inseparability of intimate and public, political and private spaces. In her performance for Elbow Room II in September 2019, she translated the categorical systems, architecture, and inscribed behavioral codes of the Salon des Amateurs into a poetic-performative space of negotiation. In her Chewing Gum Poems, on the other hand, she transforms chewing gums into speech bubbles with poems by captioning them. For a 2018 exhibition, she applied chewing gums that she had chewed herself to the floor of her Berlin gallery in order to “orally” infect it. Skinny Bitch (2019), her annual edition for the Kunstverein, brings together elements from her Chewing gum poems and performance. Whereas her Chewing Gum Poems were blackened into illegibility over time by the footprints of inattentive visitors, the text fragments in Skinny Bitch are written on a piece of found concrete, as though Bourgogne had ripped it out of the floor in order to insist on site-specificity, while simultaneously subverting it through displacement.