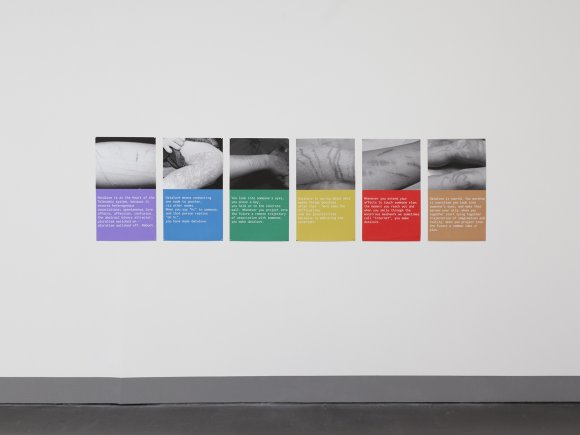 A Short Exhibit in the Ruins of “Les Immatériaux” for Instance

The characteristics that are still associated with the Internet, for example the possibility of free global communications, equality and anti-centralism as well as the related hope of a democratic potential, have not been fulfilled. Interactivity, once proclaimed by Bertolt Brecht as the utopia of an emancipatory use of media, became the central instrument of control as a dictum. Data sets wander and proliferate through permanent circulation – in part reproducing themselves algorithmically, in part through human hands – but never without agency. In the process they leave their traces in the material world, shaping it through their implications.

The multiplicity of parallel historicalities generated in real time that come about in this way has long reached a point where human consciousness can no longer grasp them as a whole. The Internet has transcended the boundaries of the world on which it feeds, never illustrating it completely in the process. In the exhibition project Yesterday Paradise, a group of artists jointly confront the impossibility of the great digital narrative with a plurality of subjective historiography. They look back at their histories of something that no longer exists as such: the Internet.

Hunter S. Thompson was already behind the times when he, armed with a sheerly absurd concoction of all common amphetamines, narcotics and psychedelics, went back to Las Vegas once again in 1971 in order to trace the remnants of a Californian dream, namely the juvenile feeling that the “victory over the forces of Old and Evil” was “inevitable” because an entire generation was in the process of “riding the crest of a high and beautiful wave”.

“So now, less than five years later, you can go up on a steep hill in Las Vegas and look West, and with the right kind of eyes you can almost see the high-water mark—that place where the wave finally broke and rolled back.”

We were long unsure about with which wave we swam when decades later, in the early 1990s, intoxicated pioneers were writing on new formats. We also missed the moment of the breaking wave, but in hindsight we must date it to the year 2004 (or perhaps even earlier – John Perry Barlow speaks of 1996, which makes sense). The many utopian program lines were overwritten with new conditions. Stronger forces had invested. The wave rumbled back.

Unlike Thompson’s wave, and unlike those from the 1960s and 1970s, its vehemence was not founded on the hope of the consciousness-altering force of music, Marxism, sex and drugs (that too) – the central promise was supplied by ones and zeros. The structurally softening energy of the digital was the storm behind the growth of a wave that took hold of ever more minds. As mentioned above, we did not comprehend it fully back then. We were just the young pimply hangers-on who did not understand what was happening to us when our three-eight-six’ers were hooked up into the telephone network for the first time.

Only after the flood can one recognise the high-water. This mark can probably be found somewhere or other in California, where once again a few people who have fallen behind the times are cruising their way around Silicon Valley with totally stoned-out eyes. The sea has calmed down in the here and now and it is difficult to say whether that is a good or bad thing. All that is left to us is the choice between transfiguration und real politics.
Carsten Benger, Moritz Herda, Dominic Osterried und Steffen Zillig

A lecture on the history of the Internet and the end of media by artists and writer Stefan Heidenreich will take place within the framework of the exhibition on August 16 at 4.00 p.m.