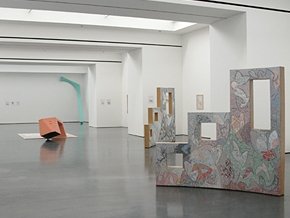 Marc Camille Chaimowicz’s (*1947) installations combine diverse media such as painting, sculpture, photography, film and performance. Commencing with a visual repertoire drawing upon art, interior architecture, literature and film, he develops complex connections in which both applied and autonomous aspects are combined. The sculptures appear to be in the throes of transformation and oscillate between their concrete matter and abstract form. Wallpaper and carpets, eccentric black ceramic pots, stools and wall consoles create an estranged sense of home. The works presented in the Kunstverein were originated during the period 1975 until 2005, some of which were especially created for this exhibition. Curated by Anette Freudenberger.