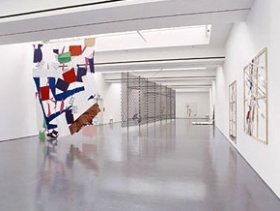 The magazine The Studio, which was co-founded by Aubrey Beardsley in 1893 and which strove to effect the unification of art and life, forms the basis of Henning Bohl’s exhibition. Borrowing from the 1902 edition, Bohl uses themes and motifs, which he duly transfers into paper works and installations. A trellis of roses shows artists names that appear as pseudonyms in the periodical, whereas other works on paper reflect the fin de siècle interest in Japonism.

Henning Bohl often uses paper , which he transfers onto canvases in the manner of a silhouette. He paints over copies, draws and institutes sculptural intrusions into available space. The references in his works are for the most part utopian impulses from the past, which he then investigates in terms of their current potential.