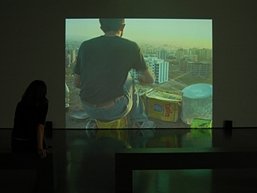 As part of The new orient

The young Kurdish artist Fikret Atay (*1976 in Batman) is exhibiting video works originated over the past few years. All of these films feature children at play in Anatolia. The various scenes that are convincingly characterised by an unpretentious pictorial language could well have been recorded in other places. The situations shown by Atay are both familiar and strange at the same time. In Tinica a youth is playing drums on tin cans in front of the silhouette of the town Batman. In Bang Bang some boys are staging mock shoot-outs between the trains. Atay shows homo ludens in a region in which the past and the future are closely woven together and yet where the capacity to engender the possibility of alternative models for action shines through.