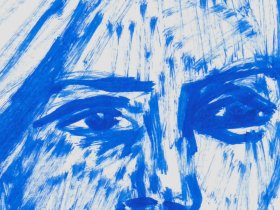 The video PAREDO MEGA BALLETT by Lena Willikens & Sarah Szczesny was created as part of the Kunstverein für die Rheinlande und Westfalen, Düsseldorf’s lockdown program. For this occasion, the artists have produced a retrospective and introspective dance video that is an extension and documentation of their solo exhibition from one year ago. The work can be seen on our new website from Thursday, May 28, 2020. PAREDO MEGA BALLETT presents sequences from the exhibition space that alternate with cell phone photographs, analog and animated painting, together with documentary fragments from subsequent projects, as well as flash sequences of twitching, dancing, and waiting phantoms. The blue drawings that repeatedly appear in the video, for example, refer to the performance Identikit Transkript Seance which took place on March 28, 2019 at the Kunstverein. They show portraits of Charlotte Ficat, Hedda Schattanik, Viktoria Wehrmeister, and Detlef Weinrich – those performers who appeared as phantoms. In between them, there is an Identikit phantom which, animated by Lena Willikens’ body, occasionally blurs with the animated drawings as a result of the rapid sequence of images. The soundtrack to the video, Paredo Megamix by Lena Willikens, was released on the EP Paredo in 2019 on Stefan Schneider’s Düsseldorf-based label TAL. The cover was designed by Sarah Szczesny. Paredo Megamix was created by layering and re-configuring existing sound fragments – in this case tracks by Tentenko, Kopy, and Miki Yui, which were likewise released on the record.

PAREDO MEGA BALLETT is the consistent continuation of the constantly expanding and self-overwriting of Phantom Kino Ballett that Lena Willikens & Sarah Szczesny have been working on since 2015. Their collaboration centers around a soundtrack comprised of music, film quotes, and interview excerpts, which is visualized through a video. According to the artists, the “Phantom Kino Ballett is sound fragment and black theatre, Holly Woodlawn’s nervous breakdowns, Taro´s arpeggiated anime, Mario Montez’ mobile, Maria Callas’ chiffre, and Anna Oppermann’s eyelashes.” Like an eternally morphing, anti-narrative cabinet of curiosities, the work is constantly being revised. Individual sound and video sequences are continually added, removed, or changed, and further context-specific, spatial, and material elements also emerge for each manifestation of the project – whether in exhibitions, performances, or in the form of self-referential snapshots of documentation that has already become obsolete in the moment of its creation.

PAREDO MEGA BALLETT is the fourth edition of a series of new contributions and artistic productions initiated by Kunstverein für die Rheinlande und Westfalen, Düsseldorf that evolved against the backdrop of COVID-19. The focus of this series of events is is the examination, appropriation and a joint negotiation of digital spaces of production – along their technological and spatial limitations, along repetitions and deceleration processes, and against the background of the current state of emergency, of masking, quarantine and self-isolation. Subsequent to the performances NYC Makeup and Wakeup # 1-3 by David Mramor, the reading sessions YGRG 166-168 by Dorota Gawęda and Eglė Kulbokaitė as well as Mi You´s reading list accompanying the current exhibition of siren eun young jung, artists such as Nicholas Grafia & Mikołaj Sobczak and Caner Teker, poet and philosopher Daniel Falb, and bookseller Siddhartha Lokanandi have been invited to elaborate new productions for our virtual Elbow Room editons, to provide insights into research projects, or to develop contributions in relation to the Kunstverein’s archive, and its newly programmed, recently published website. Information on further activities, future participants, dates and venues will follow shortly.