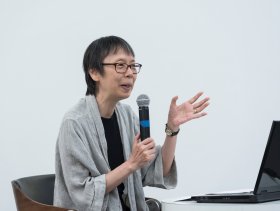 The event was part of the exhibition Ei Arakawa – Performance People, on view from May 12 – August 5, 2018 at Kunstverein für die Rheinlande und Westfalen, Düsseldorf. The presentation of the video documentation is part of our endeavour to activate the Kunstverein's new website not only as an archive, but as much as a site of participation, debate and production. In addition to announcements of events and exhibitions, it will offer documentations, ephemera, archive records as well as new artistic productions from the Kunstverein's long history.

“From early on, Ei Arawaka extensively referenced postwar art history, both of his native country Japan and elsewhere, offering daring interpretations of art history that evade the academic thinking. In his new work, Performance People, he inserts another agent, an astrologer who gives ,astrological readings' to a selectin of performance works based on the time of their initial executions. In a sense, as Arakawa points out, all three agents, a historian, an astrologer, and an artist undertake the same task—weaving a story based on a set of available data/facts according to their métiers. Taking a cue from another observation by him, facts are themselves uncertain, I will examine the anxious relationship of a historian with facts by looking at my past research on Matsuzawa Yutaka, a pioneering conceptualist who launched his Banner of Vanishing performance in 1970 and serves as one of Arakawa’s Performance People.” (Reiko Tomii)

Reiko Tomii is an independent art historian and curator who investigates post-1945 Japanese art in global and local contexts for the narration of a world art history of modernisms. Her early works include her contribution to Global Conceptualism (Queens Museum of Art, 1999), Century City (Tate Modern, 2001), and Art, Anti-Art, Non-Art (Getty Research Institute, 2007). As Co-Founder/ Co-Director of PoNJA-GenKon, a scholarly listserv (www.ponja-genkon.net) established in 2003, she has organized a number of conferences and symposiums in collaboration with Yale University, Getty Research Institute, Guggenheim Museum, and University of Chicago, among others. She is a prolific writer whose latest publication is Radicalism in the Wilderness: International Contemporaneity and 1960s Art in Japan (MIT Press, 2016), which has received the 2017 Robert Motherwell Book Award.