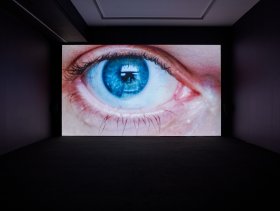 Vulnerability As a Resource: The Resilient Subject in Art and Crisis Capitalism
Conversation with Stefanie Graefe (Sociologist, Friedrich-Schiller-Universität Jena) and Vika Kirchenbauer

Resilience is becoming increasingly widespread as a “key term of the 21st century” (Bröckling, 2017) in everyday life, science and politics. The concept of the resilient subject is supposed to provide an answer to pervasive crisis and exhaustion phenomena in neoliberalism. The causes of crises and stresses are mostly considered to be unchangeable; instead, the responsibility for coping with such problems is increasingly placed upon the individual.
Central in this context is the notion of trauma, as described by sociologist Stefanie Graefe in her book Resilienz im Krisenkapitalismus – Wider das Lob der Anpassungsfähigkeit (2019, trans. Resilience in Crisis Capitalism – Against the Praise of Adaptability). Vika Kirchenbauer's work also often deals with vulnerabilities and traumas, negotiating their visibilities and invisibilities, their specific effects as well as their structural and social circumstances.
In their conversation the two will discuss the extent to which the concepts of resilience and vulnerability are mutually contingent, question the role of contemporary art as a field in this context, and explore the ways in which political and social agency can be conceived beyond this framework.

Stefanie Graefe is a sociologist and private lecturer at the Friedrich-Schiller-Universität Jena. She researches and teaches on political sociology and the relation between subjectivity, work, health and recent social change. Besides her academic practice, she has been working in the field of political labor union adult education for many years.

The event is being held in German. Admission: 5 Euro / 3 Euro (reduced). Free Admission for members.