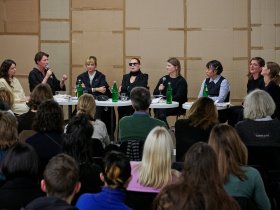 Ilka Becker is an art critic and Professor of Art History at the School of Design at the University of Applied Sciences, Mainz. Currently, within her research on art in the 20th and 21st century, she is especially interested in the relation between mediality, materiality and agency. Recent publication: “Mediators of Trance. Maria Sabina – Gordon Wasson – Bruce Conner”, in: Daniel C. Barber and Ehler Voss (eds.), The Medium on Trial. Testing and Contesting Trance and other Media Techniques, Berlin: De Gruyter (upcoming).

Nelly Gawellek, born 1984, lives in Cologne. She studied art history and general rhetoric in Tübingen. After graduating, she worked as a gallery director at Schmidt & Handrup in Cologne and Berlin and as a research assistant for the Estate of Sigmar Polke in Cologne. She is currently project manager at the Anna Polke-Foundation in Cologne. As a freelance author and curator, she is particularly interested in positions that critically examine their present, from feminism to posthumanism. She is an honorary member of the board of And She Was Like BÄM!.

Katharina Sieverding lives in Düsseldorf. She studied at the art academies in Hamburg and Düsseldorf, including with Joseph Beuys. Since 1992 she has been Professor of Visual Culture Studies at the University of the Arts, Berlin, and has taught at numerous art academies. Sieverding has received several renowned prizes for her photographic œuvre, including the Goslarer Kaiserring (2004). Since 1965, her work has featured in various international exhibitions, including the 4th and 8th Biennial of Paris, documenta 5, 6, and 7, the 37th, 39th, 46th, 47th and 48th Venice Biennale, the 4th Shanghai Biennial, as well as the 10th Busan Biennale in South Korea.

Evelyn Taocheng Wang, born 1981, lives in Rotterdam. In her classical drawings and paintings, as well as videos and performances, Wang combines a straightforward and at times confrontational tone with emotional, poetic, and often autobiographical undercurrents. Wang studied painting in China, then attended the Städelschule in Frankfurt (2010–12). Her works have been shown at documenta 14 and Stedelijk Museum in Amsterdam (2015) and were honoured with the ABN AMRO Art Award, the Dolf Henkes Prijs (both 2019), the Dorothea von Stetten Prize as well as the Volkskrant Beeldende Kunstpreis (both 2016).