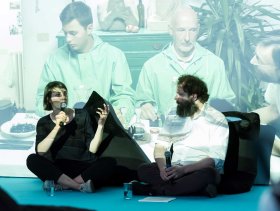 A conversation between Kasia Fudakowski and Habib William Kherbek focusing on the film project Word Count.

Habib William Kherbek is an artist and writer based between London and Berlin. He earned his PhD from the University of London in linguistics with a focus on the experimental poet John Ashbery (1927–2017). Kherbek’s writing has appeared in a wide range of publications throughout the US and Europe. His novels Ecology of Secrets (2013) and Ultralife (2016) were both published with Arcadia Missa. His critical writings have appeared in magazines such as Art Agenda, Flash Art and Spike. His fiction Cartographical Interface is included in the anthology_ Intersubjectivity Volume 1_ (2016, Sternberg Press), his latest poem_ I’m Almost Back to Normal_ was recently published in the volume Night Shifter (2018, TLTR).

In English.
Admission is free for members.