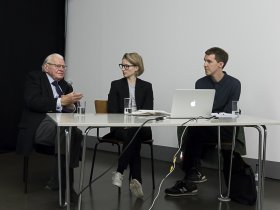 Christina Irrgang (art historian, freelance author, musician) will talk about Kreuzungspunkt: Friedrich Tamms. Archival materials form the basis for this multimedia investigation of Tamms' role in urban and cultural politics in Düsseldorf around 1967. Using his writings, essays, lectures, and diary entries, Irrgang has produced two sound works: Düsseldorf — ein poröser Zustand (a fictional narrative composed by interspersing quotations from Tamms) and Tamms’ Brücke (relating to passages from Friedrich Tamms' report on the Nordbrücke project). The integration of historical publications surrounding Tamms' urban planning contextualizes his project and its associated network within their time, while colour photographs direct our attention to the visual character of his work, which remains highly distinctive for the transit ways and general urban fabric of Düsseldorf up until today.

In his input presentation Bewegliche politische Strukturen, Massive personelle Bauwerke Arne Schmitt (artist, author) gives insights in his analysis of 20th century architecture in post-war West Germany. His contribution will further elaborate on his contribution for Asymmetrische Archiktekturen which was based on texts and documents dealing with the so-called ‘Düsseldorf architecture debate’ and the conflictive periode of the construction of a new Kunsthalle in Düsseldorf in particular.

Dr. Ewald Rathke, together with Karl-Heinz Hering (director of the Kunstverein from 1955 until 1986), was one of the leading figures in the Düsseldorf art scene of that time and as such deeply involved in the reprogramming of the Kunstverein after its reopening on Grabbeplatz. Together with Karl-Heinz Hering he organised influencial exhibitions such as the very first Dada retrospective in Europe, or first major solo shows after the war by Ernst Ludwig Kirchner, Ernst Wilhelm Nay, Sam Francis and many others.