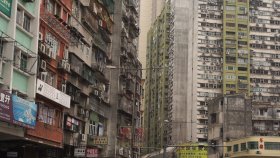 Returning with a Camera: on Class, Memory and Distance
Screening with artists Max Göran and Rita Macedo, followed by a conversation with Vika Kirchenbauer

Vika Kirchenbauer invites artists and long-time collaborators Rita Macedo and Max Göran to present and discuss their work. A long-standing exchange around shared political and artistic concerns, which has so far mostly taken place informally, will be shifted to a public setting for this event. Together they will reflect on what it means to return to one’s own past for artistic production, and at the same time question the positions from which one looks at it.

In filming dad's ass while he's chopping logs with his chainsaw (2018, 23:08 min.) Max Göran visits his father in a rural Swedish region where he works as a carpenter. With the use of a camcorder he approaches their relationship marked by political disagreement and different life circumstances. Under his son’s camera gaze the father performs himself and plays with prefabricated images, which at present often revolve around the political sentiments of the working class.

Rita Macedo’s Weeks of Sand, Months of Ash, Years of Dust (2020, 19:20 min.) introduces Macao, a former Portuguese colony in which she partly grew up. Through the form of an essay film she addresses post-imperial forms of disavowed political affect alongside the progressing dementia of her own mother. The intertwined historical and personal narratives converge into a compound reading of one through the other. Carefully positioning personal loss next to reflections on colonial narratives, the film ponders questions of looking back into a troubled past from the instability of a presently self-erasing memory.

Max Ehnlund Göran (b 1987) lives and works between London and Berlin. He is currently doing an MFA in Fine Art at Goldsmiths and has studied at the Berlin University of the Arts, in the class of Josephine Pryde (2015-2019). Together with artist Josefin Arnell he forms the duo HellFun. He had his first solo exhibition at Jenny’s in Los Angeles 2019 and has been part of several group exhibitions, and performed at galleries and institutions including Palais de Tokyo, Paris; Kunstverein München; FLAM festival, Amsterdam; MI1glisse, Berlin; Kim?, Riga; Juliette Jongma, Amsterdam; W139, Amsterdam and European Media Art Festival, Osnabrück.

Rita Macedo is a Portuguese filmmaker and video artist based in Berlin. Fascinated by the poetic affinity between moving images and fluxes of thought, Rita’s works often operate within the realm of documentary and speculative fiction, with a focus on meaning, memory and history. Her films have been shown at numerous festivals, amongst others at Encounters South African Documentary Film Festival, IndieLisboa International Film Festival, Kasseler Dokfest, European Media Art Festival, São Paulo International Short Film Festival, Curtas Vila do Conde, Encounters Short Film and Animation Festival.
Since 2018 she is part of the artistic and academic staff at the Braunschweig University of Art.

The event is being held in English. Admission: 5 Euro / 3 Euro (reduced). Free Admission for members.