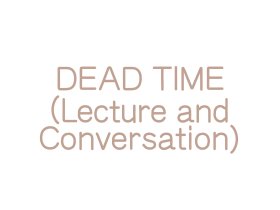 Cally Spooner’s A Lecture on Stagnation read by Will Holder …for single mothers; followed by a conversation on Dead Time, between Cally Spooner and Hendrik Folkerts.

Since 2007 Will Holder has orally published work authored by those who do not share all or any aspects of his white, male, heterosexual speaking body. The presence of these discrepancies are intended to highlight what our bodies DO have in common, and collectively undergo, rather than only speak of that which normatively divides us. Central to this series of publications is Alice Notley’s Doctor Williams’ Heiresses, (1980) and the poet’s expressed desire to synthesise a female, speaking voice within male poetic meters. Will attempts something comparable, with respect to a sense of Notley’s poetry, while reading Cally Spooner’s Lecture on Stagnation.

Will’s reading is a way to lead into Cally Spooner’s ongoing project Dead Time. Over the coming three years, Dead Time will be periodically published with Will Holder, to test a thesis — ‘dead time’ is an event that is chrononormatively-inactive and therefore holds the potential to restitute life.

A conversation on Dead Time, between Cally Spooner and Hendrik Folkerts.

Dead Time (2018) is a 63 page performance score. It was composed by artist and writer Cally Spooner, in response to what she has coined to be ‘a global techno-temporal-performance culture’; a crime scene in which it is increasingly difficult to tell the difference between what is alive and what is dead. Since 2018 Spooner has been incrementally translating Dead Time into a number of works that can coexist under various conditions, and which will culminate in an Opera in the future. For now, at the Kölnischer Kunstverein, Spooner and curator Hendrik Folkerts discuss the present-tense condition of Dead Time, avoiding future-orientated speculation and chronological reminiscence. They will be accompanied by Melody Giron on cello. She will join the conversation from New York, to present Dead Time’s current work in progress.

Typographer Will Holder makes books, and publishes the work of others, orally and in print. He likes to draw attention to an ongoing, shared authorship of meaning, co-produced in the gaps between bodies, their speech and the printed page. Since 2007, Holder edits F.R.DAVID, a journal concerned with reading & writing and typography: the organisation and reproduction of language, published by uh books, Brussels.

Hendrik Folkerts has curated numerous solo and international group exhibitions as well as collection presentations, new commissions, and public programs, anchored in the expanded field of performance and building on feminist, queer, and anti-colonial histories of art. He is a curator of Moderna Museet Stockholm. He previously held positions as Dittmer Curator of Modern and Contemporary Art at the Art Institute of Chicago (2017–2021); as Curator at documenta 14, Kassel/Athens (2014–2017); as Curator of Performance, Film, and Discursive Programs at the Stedelijk Museum, Amsterdam (2010–2015); and as the Coordinator of the Curatorial Program at De Appel arts centre, Amsterdam (2009–2011). He frequently writes for art journals and magazines, as well as exhibition catalogues and artists’ monographs.

Rooted firmly in her training in philosophy, Cally Spooner’s practice is generated through writing, unfolds as performance, then lands as film, sound, sculpture, drawings or scores. Her performances incorporate duration and rehearsal as acts of resistance to techno, temporal and performative climates in which it is hard to tell the difference between what is alive and what is dead.

Dead Time is fully supported…
… Organisationally and practically, by Rhea Dall of O-Overgaden, Copenhagen.
Academically, by the Royal Danish Academy of Fine Arts; and the University of Copenhagen, Copenhagen.
Financially, by Novo Nordisk Foundation, Hellerup.

The first cycle, reboot: responsiveness, departs from desires, anxieties and hopes amplified by the current pandemic. Hosted in two different yet aligned sites that mutually interact with one another as much as they support, complement and challenge each other, reboot: responsiveness provides infrastructures for provisional stagings, rehearsals, processual choreographies, and encounters around notions of presence, intimacy, care, and responsibility. reboot: responsiveness develops activities together with a core collective comprised of Alex Baczynski-Jenkins, Gürsoy Doğtaş, Klara Lidén, Ewa Majewska, Rory Pilgrim, Cally Spooner, and Mariana Valencia. Embracing diverse formats, and working together with further invited guests and audiences in Cologne and Düsseldorf, these artists and thinkers will explore ways to dedicate time to one another and to perform in time, to develop alternative vocabularies, archives, gestures, movements, and translations, to share and transmit resources and ideas, and to find modes of resistance and togetherness in response to the current situation we are living in.