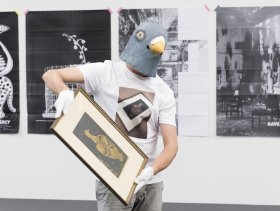 In their contribution for the exhibition Asymmetrische Architexturen – Lektüren zur Nachkriegsgeschichte des Kunstvereins, Rita McBride and Christoph Westermeier take the three-dimensional archive of the Kunstverein für die Rheinlande und Westfalen's annual editions as a point of reference. Early on, lotteries and sales of “exemplary works from Düsseldorf's local scene” made up a central focus of the Kunstverein's activities. This, however, would change over the course of the decades, and lotteries of work, prizes, and so-called Nietenblätter, would come to be replaced by annual editions or Jahresgaben in the contemporary sense, which has been in use since the 1950s. These make up a collection of artworks related to the Kunstverein, which are distributed throughout the various members' homes, far beyond the geographic boundaries of Düsseldorf. At the same time, this collection also serves as a record of the respective interests of the institution's various directors and supporting members as well as of the artistic tendencies and fields of practice prevalent during the course of its development.

Jahrskript focusses on sculptural annual editions or Jahresgaben from 1950 to 1990, which were either made available by members or drawn from the Kunstverein's holdings. With Jahrskript, McBride and Westermeier have composed an ahistorical dialogue between the objects, which is set on the fictional planets Conceptulana and Ortalana. In an interplay of verein-specific facts and documents, newspaper reports, letters of complaint, self-composed dialogues, and filmic citations, Jahrskript uses selected Jahresgaben to open up a subjective reading of the period of post-war upheaval thematized in the exhibition.

On Thursday September 5, Jahrscript will be activated in the exhibtion space for the first time as a scenic reading with Thomas Warham and Raphael Westermeier.