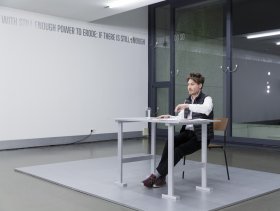 EXCEPT PERHAPS A CONSTELLATION: The Temporal Poetics of The Studio For Propositional Cinema
Aaron Peck (Writer and Critic)

The Canadian writer Aaron Peck will present the reading EXCEPT PERHAPS A CONSTELLATION: The Temporal Poetics of The Studio For Propositional Cinema.

Aaron Peck is the author of The Bewilderments of Bernard Willis (2008). Moreover he wrote Letters to the Pacific (2010), an art book in collaboration with Adam Harrison and Dominic Osterried, and more recently a critical monograph Jeff Wall: North & West (2015). In 2012, Peck was invited to participate , as a “writer-in-residence” in the art exhibition Documenta 13 in Kassel, Germany. As an art critic, he frequently contributes to Artforum and Canadian Art and has written a number of exhibition catalog essays on artists such as Jeff Wall, Corin Sworn, and Wei-li-Yeh. He has given talks at numerous museums, such as the Serpentine Galleries, Dia:Beacon, the Julia Stoschek Collection, and the Western Front. Aaron Peck is currently a lecturer at Emily Carr University of Art + Design in Vancouver, BC, where he received the Ian Wallace Award for Teaching Excellence in 2011.

The event accompanies the finissage of the exhibition IN ADVANCE OF A SHIPWRECK: by Studio for Propositional Cinema at Kunstverein für die Rheinlande und Westfalen, Düsseldorf.