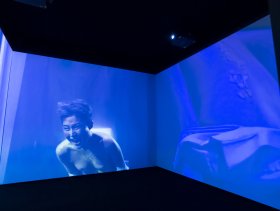 Gender in East Asia: Snapshots on Society, Performance and Ontology
Reading list by Mi You (Lecturer at the Academy of Media Arts Cologne and Aalto University, Helsinki)

Based on the works and areas of inquiry of siren eun young jung – whose European solo debut Deferral Theatre is currently on view at the Kunstverein – Mi You (lecturer at the Academy of Media Arts Cologne and Aalto University, Helsinki) has compiled a reading list around issues of gender and performativity in East Asia. If you are interested, we would be happy to send to you the suggested texts via email. Please send a short message to: mail@kunstverein-duesseldorf.de.

Gender in East Asia: Snapshots on Society, Performance and Ontology
by Mi You (lecturer at the Academy of Media Arts Cologne and Aalto University, Helsinki)
This reading list highlights voices on gender in contemporary East Asia and beyond. The two texts, by Soo Ryon Yoon and myself, included in the Korean Pavilion catalogue History Has Failed Us, but No Matter, reflect on siren eun young jung’s works and situate her exhibition in a larger social context and historical lineage, or broken continuum, of Korean performative culture. To expand the scope and further engage with contemporary East Asian society, two articles provide a glimpse into feminist movements in Korea and China: Jinsook Kim’s article #iamafeminist as the ‘mother tag’: feminist identification and activism against misogyny on Twitter in South Korea and Yige Dong’s article Does China Have a Feminist Movement from the Left? Both of them demonstrate that the tension between ‘Western’ and ‘Eastern’ feminism is not an intellectual deadlock but rather can be conducive to situated studies in each locality. The intersection between feminist movements and class struggle, in this light, is especially poignant. On the pop culture front, a commentary by Jamie J. Zhao explores the recent phenomenon of Acrush, a cross-dressing ‘boyband’ in China and how it may appear to challenge gender normativity, yet profits from its aestheticization. Jasbir K. Puar’s article Queer Times, Queer Assemblages, which has inspired siren’s thinking, takes us beyond the geographical space of East Asia and into the troubled territory of terrorist bodies. The terrorist here is cast as a queer assemblage that resists queerness-as-sexual-identity, a body against linearity, coherency, permanency, and a body that defies the terms of race, class, gender, sexuality, nation, age and religion. The sharpened sense of necropolitics, in a strange way, lends us ways of looking at the current situation, and questions how our society will become post-coronavirus, given the nationalist and normative discourses and practices that arise in this time of ‘war.’ Diving deeply into the philosophical roots of East Asia and looking inwardly into the body, Zairong Xiang’s article Transdualism: Toward a Materio-Discursive Embodiment offers a compelling perspective on gender as being below the naturalism of dualism. In generating a dialogue between the I Ching/Book of Changes and traditional Chinese medicine classics, the author observes that yang-masculinity always tends to turn into yin-femininity, and posits that the natural course of energy passing through the world as well as the human body provides an opportunity to think queer/nonheteronormative reproductivity. The juxtaposition of articles, though not comprehensive in any way, illustrates a journey both into the social-economical conditioning of gender discourses and feminist movements in East Asia today, and into the speculative terrain of reconfiguring the fundamentals of body and gender, highlighting the interplay between the social, the materialist, the discursive, and the philosophical ontological. (Mi You)

Jinsook Kim (2017) “#iamafeminist as the ‘mother tag’: feminist identification and activism against misogyny on Twitter in South Korea”, Feminist Media Studies, Vol. 17, No. 5.

Mi You (2020) “Feminist and Queer Desire and Care: On siren eun young jung’s Works”, History Has Failed Us, but No Matter edited by Hyunjin Kim, Seoul: TURTLEBOOKS, pp. 89-100.

Mi You is a lecturer at the Academy of Media Arts Cologne and Aalto University, Helsinki. Her long-term research and curatorial projects spin between the two extremes of the ancient and futuristic. She works with the Silk Road as a figuration for nomadic subjectivities and old and new networks/technologies. She has curated programs at Asian Culture Center in Gwangju, South Korea, Ulaanbaatar International Media Art Festival, Mongolia (2016), and with Binna Choi, she is co-steering a research/curatorial project Unmapping Eurasia. At the same time, her interests in politics around technology and futures led her to work on “actionable speculations”, articulated in the exhibition, workshops and “sci-fi-a-thon“, Sci-(no)-fiction, at the Academy of the Arts of the World, Cologne (2019), as well as in her function as chair of committee on Media Arts and Technology for the transnational political NGO Common Action Forum.