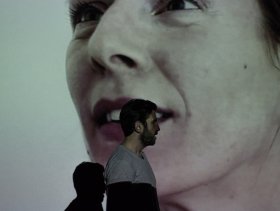 There’s No Us in Masterpiece
Keren Cytter

There’s No Us in Masterpiece is a theater play commissioned by the Stedelijk (2016) and performed by Fabian Stumm and Susie Meyer. While the actors, using their real names, engage in the consequences of their past love affairs, and the changes of their sexuality, the play questions what constitutes acting, by repeatedly shifting between the acted and the non-acted moment. By continuously changing between the live, the acted, and the filmed, Cytter ultimately puts the very notions of performance, spoken word, emotions, and reality into question.
The appearance of adult actor Colby Keller in the video that makes up part of the performance is especially noteworthy. There’s No Us in Masterpiece departs from Cytters previous performance Show Real Drama (2011).

In her videos, films and installations, Keren Cytter depicts how media, and especially social media clichés, permeate our daily lives. Using a cyclical, non-linear logic, her approach subverts linguistic conventions and traditional mechanisms of interpretation. With an explicit focus on amateur videos, her montages of impressions, memories and fantasies give rise to poetic and self-referential compositions with a penchant for intense and artificial scenes.