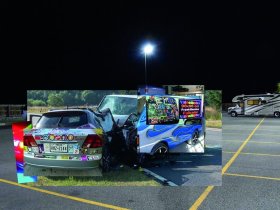 In the work cycle New Men*s Movement The Agency deals with the connections between masculinity and right-wing thinking in the post-digital age. Does the crisis of the “man” hold the potential to finally renegotiate not only gender images? What can a „New Men* Movement“ look like that opposes patriarchy, that does not mourn itself, but also does not fall into fear and anger? A movement that acts in the current climate beyond identity-political classifications and reimagines masculinities?
After the first two parts of the work cycle Gather up, Man up and BOYS SPACE, the protagonists of Take It Like a Man meet to ignite a utopian movement of de-powering. Torn between therapeutic chair circles and confessional exercises, sung manifestos and radical physical boundaries, the losers and winners of the neoliberal patriarchy struggle for a format in which masculinities can be reconfigured and linked to a left-wing agenda.
The audience* is invited to try out hybrid identities as male characters and to become part of the „New Men* Movement“.

The Agency is a young performance group that immersively experiments with the manifestations of neoliberalism. Their performances, in which audience members are gently involved as customers or future members, revolve around subversive options of agency under the conditions of the post-digital: How are our desires, our feelings, our identities and political movements formed in the post-digital age? And how is it possible under these conditions to create counter-emotions, counter-identities, counter-movements? The artistic works take on neoliberal connotations of formats and their aesthetic strategies such as branding and corporate identity, overturn the institutionalized technologies of the self in a critically affirmative way – and struggle for a utopian potential from a queer-feminist perspective.