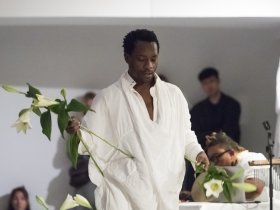 NASHA is an attempt at being less lonely when travelling, named after the artist´s little sister. It centers on and values black sociality, and resists creating something “new” through stipulation, giving context through experience. A gathering of three performances of keyon gaskin with Samiya Bashir, sidony o´neal and Adee Roberson:

MAPS:: a cartography in progress – by Samiya Bashir

the multifarious nature of care – with Adee Roberson
A new age parody infatuated with death.

Dead Thoroughbred – with sidony o´neal
DT is peri-conceptual, dis-experimental, and a-nihilist.
DT is a blackened performance that is never not happening.
DT is après-queer and post-ratchet.
DT is anti anti-capital capital.
DT is heavy evasion– worthless.
DT is useless currency devoid of value and wide in circulation.
DT has null intension and null extension.
DT is dead frivolous af.
DT is detrital presence; an exhaustion of lack.
DT is at least sidony o’neal and keyon gaskin.


: a self portrait
full moon in Taurus: of the body, for the body
reading as the invisible act i “do” in my head
but always is embodied or else i could not hold a book
the book as a dance, as a set of steps and gestures that my fingertips
can hold:
i page, i palm, i point—i
touch my mouth (this is the book too)
then close myself, shelve it away.
like the dance, it is no more and it can never be again. ephemeral.
which i know i should find comforting but which is, instead, for me, disconcerting. out of concert. i did not agree to
this. like so many things.
the body, an object—I object, I say no…there is a blood mystery and although I can be weighed, measured, prodded, counted, discounted—
the Thing is,
I is also a dance
a set of steps,
gestures,
a make-you-feel
and then I’m over.