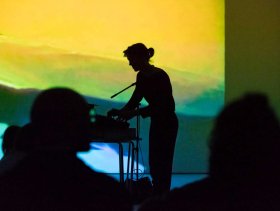 Pica Pica, the magpie, is a quadrophonic sound performance with visual interventions for which Nika Son uses the extensive video archive of musician and video artist Conrad Schnitzler (1937 – 2011) whose work inspired her in various ways. Son's sound compositions interact with Schnitzlers extensive video footage of shadows and movement to examine the relationship between light and darkness, proximity and distance, and between optical and sonic reverberations.

Nika Breithaupt (*1981) alias Nika Son works as a musician, artist, Dj and film sound-designer after graduating in Fine Arts at the Art Academy in Hamburg in 2012.