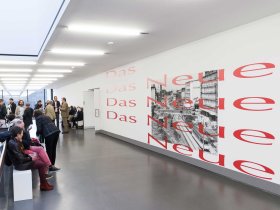 The new is a category that is difficult to grasp theoretically, in part because nobody is responsible for it. If aesthetics are namely traditionally responsible for “the beautiful”, ethics for “the good”, and philosophy for “the true”, which theory would then be accountable for “the new”? In practical terms as well, the new is something in the air rather than something that can in fact be made manifest. Especially in the field of art the new was long remarkably consistent as regards the modes in which it articulates itself: overbidding, shock, decisionism. International post-war ‘modernism’ drafts, sufficiently oedipal, the new as the final and universal, setting a still ongoing scenario of anti-oedipal oriented endgames into motion. The break with convention and the casting of tradition overboard make up, for its part, a veritable “tradition of the new”.

With a view to the news, it seems as if mobile telephone and computer manufacturers, fashion and the military were the most likely guarantors of the new. But how new are in fact the innovations recommended in pretty frequent intervals by that corner? Please do not answer before the next software update.

That is why contemporary art, which now dedicates itself – even with its name – to the present more than ever before, and in doing is willing to sacrifice its past and future, is out of the question in this regard. That would at least be “different” compared with half a century ago and it seems that even if the structure of art is not changing to a considerable extent, its sociological conditions and cultural effects are. In the process, the increasing desire for the new and its inconceivability have until now stubbornly balanced each other out.

As a general rule one could say that only a few are required to herald the new and perhaps not many more to realise it. But almost as soon as the new has become widespread it is no longer new. In this sense, the new has always already been an old hat. And in any case it is also a myth that the new is achieved in a fundamentally progressive dynamic.

Conceived by the Stuttgart-based graphic designer, artist and teacher Michael Dreyer (Merz Akademie, Stuttgart) and Hans-Jürgen Hafner (Kunstverein für die Rheinlande und Westfalen, Düsseldorf) in consultation with the artist and filmmaker Alexander Wissel, The New is not an exhibition in the narrowest sense but is formed discursively from a pattern of diverse event formats with public venues in the Kunstverein für die Rheinlande und Westfalen, Düsseldorf, and with a temporary presentation for the staff of the WDR at the broadcasting company’s Cologne headquarters.

The New incorporates historical objects, current artistic, filmic, artistic and performative works, lectures and, if time and money don’t run out, a digital finding aid. The thematic project inquires about present views on the concept of the new and finds a point of comparison in the extensive popularisation of the new in art, music, theatre and architecture as it was distinguished the immediate post-war phase in Germany known as the phenomenal first years of the so-called economic miracle.