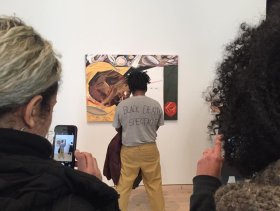 “It's really annoying, it's really frustrating that I am being viewed more and more as – I don't know… An oddity? A threat? I don't know.” Trans* video blogs offer an entry point to problematizing the intricacies of sexuality, masculinity, and race: The above statement is articulated by a trans* vlogger whose self-documentation on YouTube reflects his becoming a black male as becoming a threat. In one of his frequent video updates to his online trans* community, the video camera becomes a medium not only of visual assurance of the documented bodily transition since taking testosterone, but of the different perception of racism that comes with passing as male. We argue that this transition is profoundly connected to documentation practices, media effects and technical conditions which trigger racist visual archives and reinforce a trope of the “angry black man”: Certain video images echo specific visibilities of black masculinities such as surveillance and policing footage. Also at the height of the discourses on police violence against black people and the “Black Lives Matter” movement, Parker Bright intervenes in both the construction of racist visual archives and their current remediation: In his 2017 performance in front of Dana Schutz’ abstract painting of the Emmett Till photography during Whitney Biennial in NYC, he contests these archives by blocking the view to the iconic image and wearing a T-Shirt stating “Black Death Spectacle”.
Addressing these complex entanglements of visibility, surveillance, and life-threatening precarity, the practice of video-based self-documentation and the public performance become as much a medium of self/identification with specific masculine subjectivations, as of self-care. In our talk we will aim to trace the contemporary material practices of these visual media archives and try to figure out how they perpetuate and transform mediated black masculinities.

Jasmin Degeling is a research assistant at the Institute for Media Studies at Ruhr-Universität Bochum, as well as a member of the executive board of Gender Studies at RUB and, since 2018, co-editor of the online journal kultur & geschlecht. From 2016 to 2018 she was a member of the collaborative network Queer Temporalities and Media Aesthetic (RUB/Northwestern University/Illinois); before that she worked at the Institute for Theatre Studies at RUB (2014–2018), was a visiting scholar at the German Department/UC Berkeley (2014) and scholarship holder in the PhD-Net Das Wissen der Literatur, HU Berlin (2013–2014). She studied theatre and literature studies as well as gender studies in Bochum and Paris. She recently completed her doctoral thesis, entitled: Medien der Sorge, Techniken des Selbst. Praktiken des Über-sich-selbst-Schreibens bei Christoph Schlingensief und Elfriede Jelinek.

Sarah Horn has been a fellow of the interdisciplinary DFG graduate program Das Dokumentarische. Exzess und Entzug since 2016. Her PhD project addresses self-documentary practices and queer temporalities in trans video blogs on YouTube. She studied media cultural studies and media law at the University of Cologne (B.A.), and media studies at the Ruhr-Universität Bochum (M.A.). From 2016 to 2018 she was a member of the collaborative network Queer Temporality and Media Aesthetics established between Ruhr-Universität Bochum and the Critical Theory Cluster of Northwestern University, Evanston (Chicago).