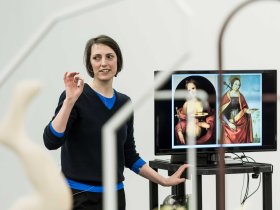 Drawing on her role as an artist, Kasia Fudakowski (*1985 in London, lives in Berlin) uses self-imposed rules to push inequalities, stereotypes, and a warped social logic beyond the point of absurdity. As with the exhibition cycle Fraustellungen (Femalexhibitions), which concluded in 2015 with Sexistinnen – Excersises in Self-Sabotage – a self-ironic, staged performance made together with her gallerist at Art Basel. Or with Double Standards – A Sexhibition (2017), which presented viewers with the choice of entering either the left or the right door to the exhibition without knowing what to expect in either case; a reaction to the UK referendum which forced citizens to vote either ‘Yes’ or ‘No’ without being provided with detailed information on the consequences of their decision. The lecture gives a great opportunity to get to know Kasia Fudakowski´s work.